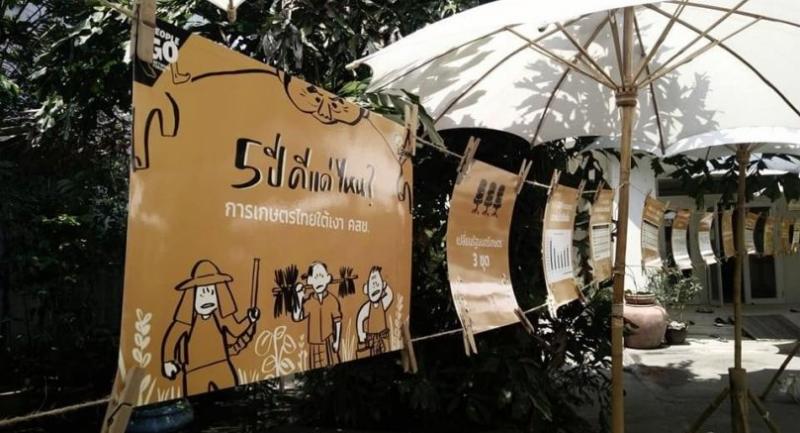 THOUGH THE junta-led government’s initiatives and limited reforms over the past five years have been praised in some quarters, citizens have often expressed dismay at restrictions on social and community activism.

Rule by the National Council for Peace and Order has been criticised as too repressive, undermining people’s strengths.

This was a common opinion expressed by community-rights advocacy groups recently, at a forum to examine lessons learned during five years of military rule.

Chadaporn Chinbutra of the Natural Resources and Environment Network said that under junta rule, locals who stood up to protect their natural surroundings were frequently threatened rather than listened to.

Residents objecting to community development projects have been pressured to back down, while public participation and access to information is restricted. Community activists have even been charged with offences, she said.

“The people’s voices aren’t being heard regarding projects introduced in their neighbourhoods. Often, they can’t say they’re not okay with the project,” Chadaporn said.

In Loei province, locals opposing a gold mine were “invited” to a military camp for “attitude adjustment”, she said.

The NCPO has often used what activists call SLAPP (strategic lawsuits against public participation) to silence objectors and relied heavily on its law banning public gatherings of more than five people, she said.

“Some of the laws enacted and orders issued by the NCPO have been suppressive,” Chadaporn added, citing legislation on factory operations and city planning and Orders 64 and 66 concerning forest encroachment, which have adversely affected forest-dwellers.

The hope now is that citizens can regain powers lost under the junta through the political parties representing them. Several parties have vowed, if elected, to scrap all NCPO orders and pro-military constitutional amendments, as well as any legislation limiting community rights and environmental protections, Chadaporn noted.

“Democracy should come from the people and ensure that they are respected,” she added.

Kanokporn Ditthakrachan of the Sustainable Farming Network said the government had lowered tariffs and signed free-trade pacts to the detriment of the Thai farming community. And its policies promoting the import and use of chemicals posed a direct challenge to sustainable farming.

Kanokporn said that solutions and alternatives proposed by her network to the government were consistently rejected by authorities, leaving problems unresolved.

She too hopes the election brings true democracy and allows voices of farmers to be heard. Their proposals that certain farm chemicals be scrapped and crop varieties be protected must be heeded, and their land must be secured, she said.

“The new government should promote food production that supports health and the environment, instead of just paying lip-service to the issue. Food security and food safety is no less important than other work,” Kanokporn said.

Apiwat Kwangkaew of the People’s Network for Social Welfare blamed economic woes on the state’s mindset, which views the public and the social welfare built over so many years as nothing more than a burden.

For instance, he said, moves have been made to restrict healthcare that is now universal to only the poorest citizens, dismantling a strong welfare scheme created to cover everybody in the country.

Other examples cited by Apiwat were erosion of social security for poor and disadvantaged Thais, and monthly payments to senior citizens, which he said all reflect the state’s retrograde mindset.

“These schemes are the result of absolute power. They prompt citizens to believe the state does not to care about people’s voices,” Apiwat said.

He added that people should vote to bring back true democracy, under which social welfare can grow to support the people.

Assistant Professor Somchai Srisan, of the Academic Network for Civil Rights, said several government policies had weakened people power and strengthened the hand of the state.

He said the state had suppressed academic freedom, changing the role of academics and also interfering with their personal affairs and privacy.

Many academic forums have suffered military control, with academics called in for “attitude adjustment”, the professor said. Students and academics critical of junta rule now face jail terms, he pointed out.

“Our society has turned into a military-style democracy, with discipline being forcefully imposed,” Somchai said. “It’s a society that accepts coups, preferring the use of force and ‘whistle-blowing’ as a way of solving problems. This will become deep-rooted if it’s not corrected now.”

He said the idea of discipline nurtured in academia did not mean listening without questioning, adding that academic institutions are not military camps and Thailand is not a military detention zone.

Kanin Cherdchai, from the Network for Young People for Social Change, said voices of young people have been suppressed, including that of Pai Daodin – an undergraduate student in jail for his anti-coup activism.

Kanin said many new laws, such as the government’s 20-year national strategy, deprive the young of their rights and future opportunities.

“We have become uncertain about our future these days, so have decided – as first-time voters – to exercise our right,” he said, explaining why more youngsters are engaging in politics nowadays.

Yingcheep Atchanont from iLaw, which helps monitor law enforcement under military rule, also urged people to come out and vote on Sunday, saying that only ridding politics of “the same old faces” would bring true freedom and democracy.