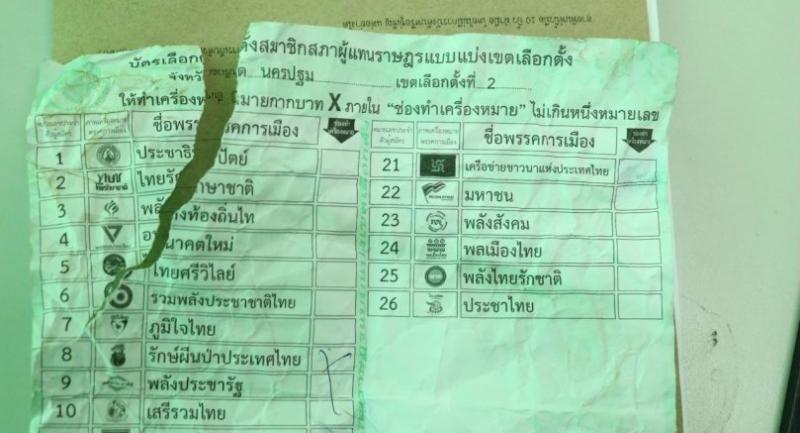 Two voters in Lamphun and Nakhon Pathom provinces on Sunday, who claimed to be drunk, were detained for allegedly damaging their ballots.

Both claimed that they were under the heavy influence of alcohol, and had unintentionally damaged their ballot papers.

In Lamphun, police detained Korakot Thamnasart, 40, of Muang district for allegedly tearing up his ballot.

An election official said that Korakot showed up at the polling station, checked his name on the list and received the ballot. He then asked officials about the numbers of some candidates and became angry after they refused to answer as they were forbidden by law to do so.

Korakot then allegedly tore apart the ballot, resulting in his arrest. He was charged with damaging the ballot.

Pol Colonel Pattanapong Kamkaew, the Lamphun police chief, said the suspect appeared to be drunk when he showed up at the voting station.

Police rushed to a polling station in Tambon Huaymuang and found Winai drunk. He reportedly told police he was drunk when he showed up at the polling station. “After I marked my ballot, I found that I had voted for the wrong candidate. So, I crushed the ballot paper and was about to throw it away when officials saw my action and alerted police,” he claimed.

He was charged with damaging the ballot.

If found guilty, both of them could face a jail term of not more than five years, a fine not exceeding Bt100,000 and lose their election rights for 10 years.