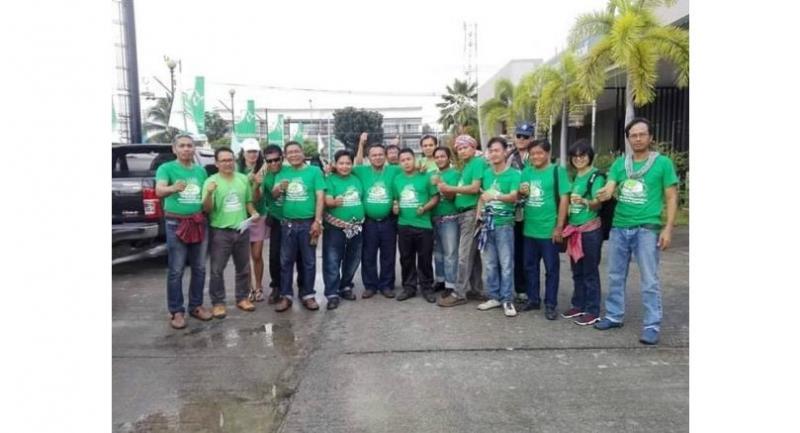 Green Party leader Phongsa Choonaem, with a turban, takes a photo with party members after learning the election result.

Small parties have vowed to continue campaigning and slowly building support after failing to make much of an impression at the ballot box on Sunday.

Though accepting of their defeat, the Commoners Party and Green Party said yesterday that they would continue working on wooing voters for the next election.

The two parties, both newcomers, failed a single MP seat. As of yesterday afternoon, the Green Party, which focuses on forest and land issues, had registered 20,753 votes, while the Commoners Party, which is supported by local environmentalists, only secured 4,646 votes.

Commoners Party leader Lertsak Kumkongsak said the failure was not unexpected because his party is still new to the political landscape, and not many people know about it.

“Actually, our score is rather surprising, because we got votes from people outside the areas where we campaigned, which shows that people understand and agree with our principle to fight for democracy, human rights and social justice from the bottom up,” Lertsak said.

He revealed that even though Commoners Party did not win a single MP seat, it still gained major votes in areas that are affected by environmental and social issues such as communities around Thung Kham gold mine in Loei’s Wang Saphung district.

“This election has taught us that we still have problems accessing people outside our campaign areas, so from now on we will have to make our presence felt among the wider public so that more people understand what we are trying to achieve,” he said.

“This is also our first step toward removing a dictatorship. Even though the pro-junta party may have the upper hand in this election, pro-democracy parties have also won significant votes, and we intend to join them in the next election.”

He added his party would continue seeking new members to reach the goal of 5,000 by the end of 2019, and build a wider public support base. The party members also plan to work at the local level to help combat social and environmental problems for residents and build a bastion for the next election.

Green Party leader Phongsa Choonaem put his party’s failure to win a seat down to similar problems as well as not having a support base.

“Our not winning a single seat was expected. Similar parties in other countries do not perform well in their first election,” Phongsa said.

He added that winning more than 20,000 votes was a good start, because it showed that many voters cared about the environment and want to push environmental policies in mainstream politics.

“It’s a humble start, but like a tree we will slowly grow and finally thrive in mainstream politics,” he said.

Along with the Commoners and Greens, another small party that participated in the elections was the Thai Forest Land Reclamation Party.

As per the unofficial final tally yesterday, it had won 122,494 votes and gained one party-list MP seat in Parliament.