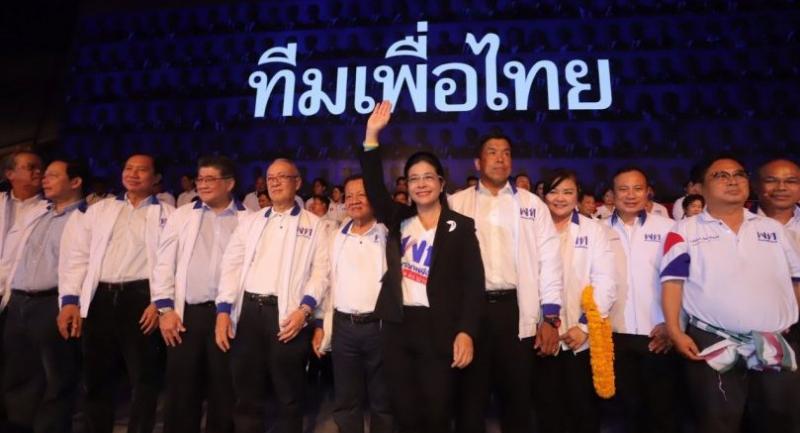 Party stitches together coalition of six parties, says poll results point to a rejection of Prayut.

THE PHEU THAI Party has reportedly put together a coalition of six parties including Future Forward, Seri Ruam Thai, New Economics, Prachachart and Puea Chat to stake its claim to form a government with a total of over 250 seats in the Lower House.

Pheu Thai, which won the most number of seats in the election, yesterday claimed legitimacy to form the government, arguing the mandate was a rejection of premier Prayut Chan-o-cha continuing in office.

With 95 per cent of ballots counted, Pheu Thai has won 137 constituency seats against the 118 of the pro-junta Phalang Pracharat Party, which however secured the most number of votes.

“It should be deemed that Pheu Thai won the people’s mandate to run the country,” the party said in a statement yesterday.

“Combined with the seats of parties that have always been clear about opposing the junta, we have more than 250 MPs and our total votes are 6 million more than what the pro-junta camp has gained,” it said.

The party said the electorate had delivered a clear message that the majority of people did not want General Prayut, who staged a military coup in 2014, to continue as prime minister. The coup led by Prayut had led to the toppling of the Pheu Thai-led government under Yingluck Shinawatra.

“Hence, it is against the will of the majority for parties to support General Prayut,” the statement read. “The [Prayut] coalition subsequently will not be accepted, become unstable, and will not be able to solve economic and other issues.” Meanwhile, the pro-junta Phalang Pracharat, which won the popular vote with 7.9 million, yesterday expressed confidence about forming a coalition, saying it had already had begun discussions on putting together a coalition with likeminded parties. It also insisted on reinstalling Prayut as premier to lead the post-election government.

“Since announcing that we’re ready to lead the coalition, we’re making good progress but we’re also waiting to see the official election results from the Election Commission,” said its secretary-general Sontirat Sontijirawong.

He said negotiations with other parties had been positive, but it was too soon to discuss Cabinet positions.

Questioned whether Phalang Pracharat had the legitimacy to lead the government, Sontirat said if it could get the most number of votes, then that was true legitimacy.

Sontirat also admitted the party had approached Bhumjaithai Party to join its coalition. But while it said Pheu Thai had offered Bhumjaithai the top job, Sontirat insisted Phalang Pracharat was determined to ensure the PM position goes only to Prayut.

Pheu Thai secretary-general Phumtham Wehcayachai also made it clear that the party supports Khunying Sudarat Keyuraphan to be its prime minister candidate and this is not a point of discussion to form a coalition.

With swing parties supporting one of the two camps hoping to successfully form the next government, the Democrat Party made clear its stance against joining the pro-Shinawatra camp.

Democrat deputy leader Korn Chatikavanich, whose party won 55 seats in Sunday’s general election according to unofficial results, on Monday posted on his Facebook page that he had not held discussions with any bloc about forming the next government.

“Now there are many rumours. Don’t pay attention to it. For me, it’s impossible to support Pheu Thai [to form the next government],” he posted.

His party’s decision about joining any camp would be clearer when its executives meet and come to a resolution on the matter, Korn added.

Meanwhile, Bhumjathai, the unofficial winner of 52 seats and seen as the most powerful swing party as it could join either the Shinawatra camp or the pro-junta camp led by the Phalang Pracharat Party, remained silent yesterday.

A source from the party denied that its leader, Anutin Charnvirakul, had met with Defence Minister and Deputy Prime Minister Prawit Wongsuwan at a military barracks to talk about forming a coalition government.

Prime Minister Prayut yesterday distanced himself from the ongoing struggle to form a coalition, saying it does not concern him as the current prime minister.

After the election, the junta chief said the focus had now been shifted to holding the coronation ceremony coming up in early May.

However, Prayut yesterday did mention “hopes and dreams” at least twice. Borrowing the idea from a book whose title he said he could not remember, Prayut said hopes and dreams are like a kite.

“You cannot just let them fly in the air. You need a good string to fly them or they’ll be gone,” Prayut added metaphorically without elaborating.

Prayut also announced yesterday that this Friday, he would be presenting the last of his TV monologues “The King’s Philosophy” where he mostly talked about the government achievements.