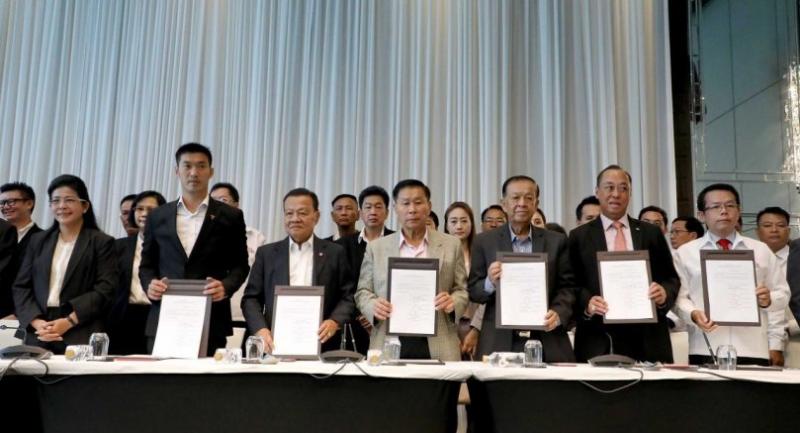 Leaders of six parties, led by Pheu Thai, who claim to have the support of at least 255 MPs gather at a hotel in Bangkok yesterday to issue a joint statement that they will block the junta’s moves to remain in power.

AS THE TUG of war between the pro-junta and anti-junta camps continues after the elections, with both sides declaring victory and claiming the right to form the government, a scholar said the principles of parliamentary system favoured the party with the most seats, rather than the popular vote winner. Hours after Pheu Thai-led pro-democracy parties yesterday announced they had at least 255 MPs and were ready to form a coalition, the pro-junta Phalang Pracharat Party also held a press conference, claiming Pheu Thai was bluffing as the election results had yet to be finalised. “They were just taking the opportunity to announce they have mustered a majority of constituency MPs, but the process is not finished yet,” Phalang Pracharat’s secretary-general Sontirat Sontijirawong said. “In reality, the Election Commission [EC] still has to announce the final results. The figures change every day.”

He added that this was not the time to claim victory, as the contest had not ended yet. Sontirat called on the anti-junta bloc to stop exploiting the term “democracy”, and pointed out that his party – which backs General Prayut Chan-o-cha’s return as prime minister – had also “democratically” won 7.9 million votes.

“Democracy is about respecting the people’s decision,” Sontirat said. “Phalang Pracharat is also a pro-democracy party.”

Party leader Uttama Savanayana backed his colleague, saying Phalang Pracharat was in talks with like-minded parties about forming a government.

“We still have some time and don’t need to rush,” he said, refusing to name the parties Phalang Pracharat was in talks with.

However, both Sontirat and Uttama were reluctant to confirm if their party would be able to bring together more than 250 MPs to form a coalition.

The EC has yet to announce the official number of MP seats won by each party. Though Phalang Pracharat has won the most votes, initial calculations show its share in the Lower House is 97 seats versus Pheu Thai’s 137. Meanwhile, Pheu Thai led six other parties to issue a statement saying they would stand against the junta’s moves to retain power, claiming they already had the support of at least 255 MPs.

Though no representatives of the New Economics Party showed up at the press conference yesterday, it has been confirmed that their six successful MPs will join the anti-junta coalition.

The anti-junta bloc also declared yesterday that the more than 14 million votes won by them proved the public had given them the mandate to overthrow the coup-installed regime.

The party leaders yesterday also pressured parties sitting on the fence to respect voters and join efforts to stop the junta from retaining power.

Future Forward Party leader Thanathorn Jungroongruangkit said yesterday that Pheu Thai’s de facto leader, Khunyin Sudarat Keyuraphan, was the most suitable candidate for the government’s top job, though Pheu Thai said the nomination of the PM will be discussed after a coalition has been formed.

There has been talk that Pheu Thai may be saving the top post for Bhumjaithai leader Anutin Charanvirakul, whose party has won over 50 seats, in a move to secure the formation of a coalition and effectively block the pro-junta camp.

However, Pheu Thai secretary-general Phumtham Wechayachai said yesterday that the party has never indicated it would support Anutin.

As for Phalang Pracharat claiming victory in popular votes, Pornson Liengboonlertchai, an expert from Chulalongkorn University’s Faculty of Political Science, said this claim does not match constitutional principles.

The Constitution says the country is run under a “representative democratic” system as opposed to a “direct democracy”, he said, adding that it is constitutional convention that the party with the highest number of MPs reserves the right to form a government.