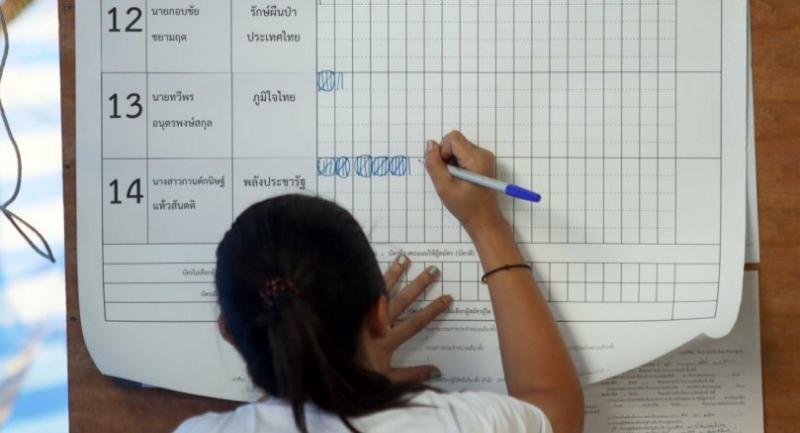 THE ELECTION Commission (EC) said yesterday that the results after counting the remaining 5 per cent of votes could not be announced due to complaints of irregularities in some constituencies even as political parties and activists piled pressure on the agency to announce the final tally to endorse the winners.

At least seven political parties yesterday sent their representatives to lodge complaints with the EC, seeking an explanation for the slow pace of ballot counting and irregularities.

The EC would take time to investigate all the 146 complaints but would complete it before the official deadline for the announcement of election results on May 9, secretary-general Jarungwit Phumma said.

He said the commission will examine votes for all candidates and announce the results and other information about the polling to the public tomorrow.

Meanwhile, the Democrat Party has called on the EC to respect the rights of Thai voters in New Zealand after the commission’s decision not to count them. The New Economics Party yesterday asked the commission to calculate the number of party-list seats.

Pheu Thai spokesperson Ladawan Wongsriwong said the public expected to know the final results of the voting two days after the election.

With 95 per cents of the ballots counted, Pheu Thai claimed victory in 137 constituencies and led a coalition of seven parties to compete with the pro-junta camp to form the government.

Future Forward spokesperson Pannika Wanich said the commission’s performance did not deserve the Bt5.8-billion budget allocated to them from taxpayers’ money. “In previous elections, people knew the final results of the ballot counting within seven hours of the poll stations closing,” she said.

Activist Srisuwan Janya, secretary-general of the Association for Protection of the Thai Constitution, said yesterday that he will collect the signatures of at least 20,000 voters to back his petition to impeach the election commissioners for misconduct after EC decided not to count the ballots from New Zealand, because they were delayed. The campaign will kick off on Sunday at Talad Mai Don Muang, he said.

Former red-shirt leader Thida Thawornseth submitted an open letter to the commission, seeking clarifications over 11 irregularities, including the restricting observers, not showing invalid ballot cards and not allowing representatives of political parties to take pictures in the polling stations.

The Thammasat University Students Union yesterday denounced the EC for its inefficient and opaque work during the election.

EC president Ittiporn Boonpracong said yesterday the agency took the blame for some of the problems found during the election but rejected speculation that the irregularities could lead to the annulling of the election.

“The results of the ballot tally have been shown at polling stations since the beginning and the people or political parties can check there,” he said. “The result is now being transferred to the commission at the provincial levels and to the EC headquarters eventually.”

Asked if the commissioners would be impeached, Ittiporn said the commission would do its best to fix up all the problems first. “The rest is up to the situation in the future,” he said.