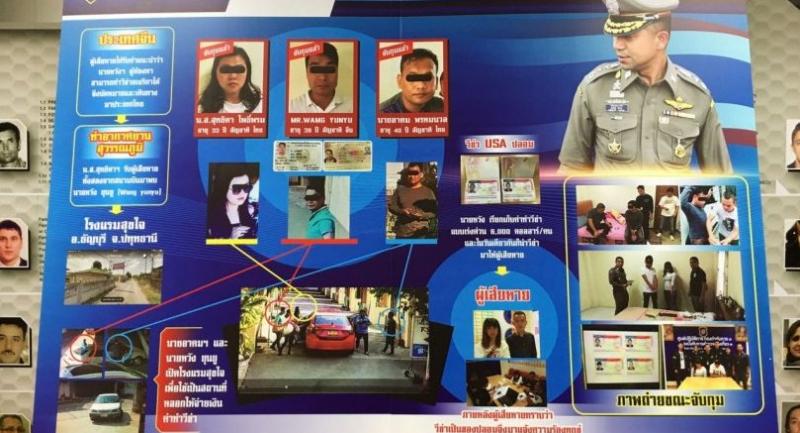 Two Thai citizens and a Chinese man have been arrested for allegedly talking eight Chinese nationals into paying them US$6,000 (about Bt200,000) each for a so-called US entry visa.

Immigration Police chief Pol Lt-General Surachate Hakparn held a press conference on Thursday to announce the arrest of Sutthida Phoprom, 33, Arkom Promnuan, 40, and Wang Yunyu, 39. The three were detained under an arrest warrant issued by the Thanya Buri Court on March 25.

Surachate said Sutthida and her husband, Wang, were arrested in their home in Chiang Rai’s Chiang Saen district, while Arkom was arrested at the Iayara Market in Pathum Thani. The immigration chief said his bureau had received complaints from two Chinese men on March 16 that they had been duped out of $6,000 each by the three suspects. The complainants said they had made the payment at a hotel in Pathum Thani’s Thanyaburi district after the group promised to get them an entry visa to the US. However, when they got their passports back, they discovered that the visa stamps were fake.

Surachate said police investigators found that Wang had posted advertisements on social media saying he could get US entry visas for Chinese passport holders.

The group then persuaded their victims to come to Bangkok, and Sutthida would meet them at the airport before escorting them to a hotel. Once the victims paid the fees, Arkom would then take their passports and stamp them with a so-called US entry visa.

Police investigators have learned that they have deceived at least eight people so far.