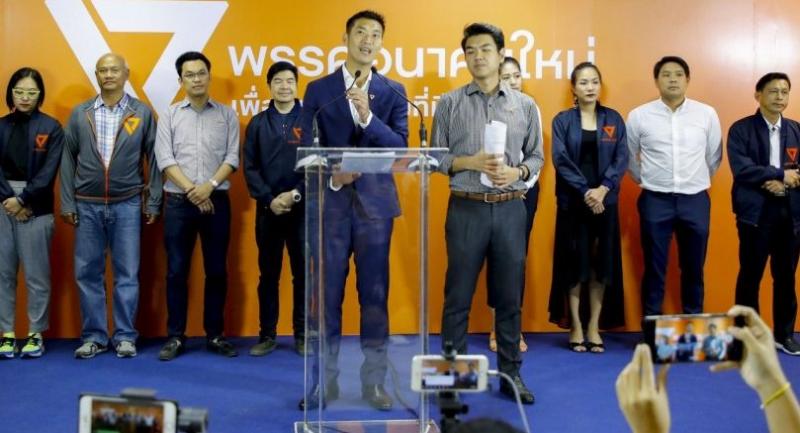 The Future Forward Party, which made an impressive debut, finishing as the third-most popular choice with more than 6.2 million votes and more than 80 House seats, is composed entirely of new faces. Photo/EPA The Future Forward Party, which made an impressive debut, finishing as the third-most popular choice with more than 6.2 million votes and more than 80 House seats, is composed entirely of new faces.  Photo/EPA

While last weekend's election seems unlikely to lift the Kingdom out of its deep political divide, it has at least exposed new catalysts for change, with voters choosing many young faces to try and brighten the future.

The electoral system was apparently designed to limit the size of political parties – ensuring none was big enough to dominate the House of Representatives.

According to the latest figures from the Election Commission, no party won a landslide victory. The party that won the greatest number of seats – be it Pheu Thai or Phalang Pracharat – will eventually have slightly more than a quarter of the 500 seats in the Lower House, which will stop them from setting up a single-party government.

The Thaksin Shinawatra camp, which has dominated previous elections, failed to retain that advantage after the Thai Raksa Chart was disbanded a mere two weeks before election day. The party had been set up to focus on the mixed-member appointment system while its sister party Pheu Thai concentrated on constituency seats.

Now, with Thai Raksa Chart gone, Pheu Thai has no party-list seats. Meanwhile, though the pro-junta Phalang Pracharat won few constituency seats, it will still benefit from the altered electoral system, which many analysts say was designed to allow the junta to perpetuate power.

Though this election was perhaps one of the longest-awaited in recent memory, the 75 per cent turnout was not abnormal. The same ratio of voters had came out in July 2011.

Many first-time voters told The Nation Weekend they exercised their right to vote in the hope of bringing about change, even though they suspected it was a virtual lost cause in this election.

“This election won’t trigger any changes because it was designed by people who want the status quo to continue,” said a first-time voter, asking to be identified only as Phon.

“But I hope it spurs more conversation about the country’s future, which might lead to whoever is ruling becoming more responsible or even giving us another chance to vote – on a more level playing field.”

Generally, the successful candidates are not really young, with an average age of 52. The party with the oldest candidates – average 55 – is Pheu Thai, followed by Phalang Pracharat (53) and the Democrats (52). The rookie Future Forward Party stands to have a relatively younger representation in the House, averaging 45 years old. The Commoners Party, with candidates averaging 43 years old, won no seats in the election.

Future Forward co-founder Taopiphob Limjittrakorn said young voters chose him because they were “bored” with the established elite. The young maker of craft beer entered politics with the hope of breaking up business monopolies and helping reshape the political landscape.

The Democrats, the oldest Thai party, suffered a major setback last weekend, losing its strongholds in the capital and most of the South. Party leader Abhisit Vejjajiva stepped down to accept responsibility for the defeat.

Many observers said the Democrats lost votes to Phalang Pracharat in Bangkok and the South because Abhisit refused to help Prayut Chan-o-cha retain power. The pro-junta party won a lot of seats in the upper Central region and lower North.

However, Phalang Pracharat’s victory and the Democrats’ defeat made little difference in the political landscape because they appear to be sticking together.

Pheu Thai, meanwhile, managed to hang on to its strongholds in the far North and Northeast, but was unable to take the largest northeastern province, Nakhon Ratchasima, because Phalang Pracharat had poached some of its MPs from that area. Unlike Future Forward, which won a surprise victory among young voters, Phalang Pracharat emerged as the most successful newcomer in the election – especially since it managed to take advantage of the privileges embedded in the revised electoral law.

Its PM candidate is the incumbent and the party cleverly used the name of the junta’s pet project, Pracharat, in its branding.

In the big picture, this election is unlikely to end the chronic polarisation, with both pro- and anti-junta camps, led by Phalang Pracharat and Pheu Thai respectively, compete to claim legitimacy to form a government.