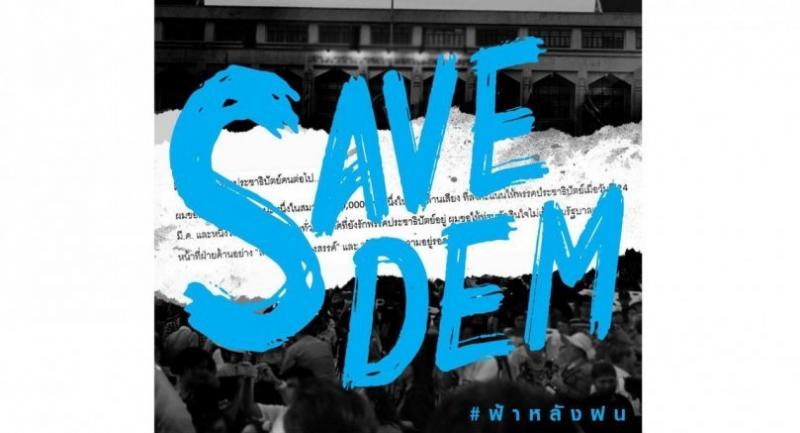 A photo with the message “Save Dem” is posted on the Facebook page of Parit Wacharasindhu with his suggestion to the new Democrat Party leadership not to join a coalition government.

The Democrat Party has arrived at another crossroads, forced to decide whether to support the military’s continued role in politics or to erase the long-held public perception that it is willing to compromise with the generals.

The country’s oldest political party, tipped to win 55 House seats following last month’s election, is seen as a swing party that can tilt the scales for the Pheu Thai or Phalang Pracharat bloc to form a coalition government.

Abhisit Vejjajiva had appealed for support prior to the election when, still leading the Democrats, he declared the party would not support General Prayut Chan-o-cha’s return to power as prime minister, nor would it ally with any corrupt politicians. The 72-year-old Democrat Party suffered a huge loss in the polls. It failed to secure a single seat in its Bangkok stronghold, losing votes to Phalang Pracharat and Future Forward.

Observers believe Abhisit’s resignation as leader after the dismal outcome could pave the way for the Democrats to join a Phalang Pracharat-led coalition.

However, key Democrat figures say they will wait until the Election Commission announces the official poll results, which is scheduled on May 9, before it makes a decision on which camp to join. It is unlikely the Democrats will support the Thaksin-backed camp massed around Pheu Thai.

Its members are split at the moment between joining a Phalang Pracharat coalition or serving as an independent opposition party.

But the “New Dem” group led by Parit Wacharasindhu has suggested it play a “constructive” opposition role in line with its ideology rather than join any coalition government. Parit, a nephew of Abhisit, posted the suggestion on Facebook and Twitter on Friday with the hashtag #savedem.

“As a party member and a representative of the 3.9 million popular votes we won, I think we need to be honest to our ideology,” Parit said.

“I beg you [whoever is chosen to lead the party next] not to join any coalition government bloc and choose to play the role of independent opposition party gracefully and constructively for the party’s survival. At the same time, we will play a role in scrutinising the government,” he said.

The party should leave the decision to its 140,000 members around the country by conducting a primary vote, Parit said.

Parit’s idea appears to have some support. The post was shared more than 5,000 times and re-tweeted 6,000 times within just a few hours.

Most readers’ comments backed the party and urged it to respect voters and stand behind its policy of withholding support for the pro-junta camp or corrupt politicians.

Supinya Klangnarong, a media activist and former member of the National Broadcasting and Telecommunications Commission, on Friday re-tweeted Parit’s message and added her own comment.

“I give my support to the stance of the New Dem. No matter who will become the next government, the party should be a high-quality, independent opposition party.

“It’s a very meaningful mission [for the Democrats] to speak for or be the voice of people in Parliament,” Supinya wrote.

Analysts tend to concur that the party’s younger generation could not resist their seniors after Abhisit led the party to such a heavy loss.

But the Democrats could turn crisis into opportunity with the right post-election moves, they believe.

“If they want to recover and restore the faith soon, they should declare they will play the role of an opposition party, a role they play very efficiently,” said Yuthaporn Issarachai, a political scientist at Sukhothai Thammathirat Open University.

As a medium-sized party with 55 seats in hand, the Democrats would gain little and have limited bargaining power if they join a Phalang Pracharat coalition, he added.

The next government is unlikely to last long and House dissolution is possible, the academic said.

The difference in the number of MP seats available to each camp to form a coalition is narrow, he said, so government stability could be elusive.

“This is a crucial time for the Democrats to show voters whether they’re sticking to their ideology or just going back to being the old Demo- crats,” Yuthaporn said. That would include a readiness to make deals with the military.