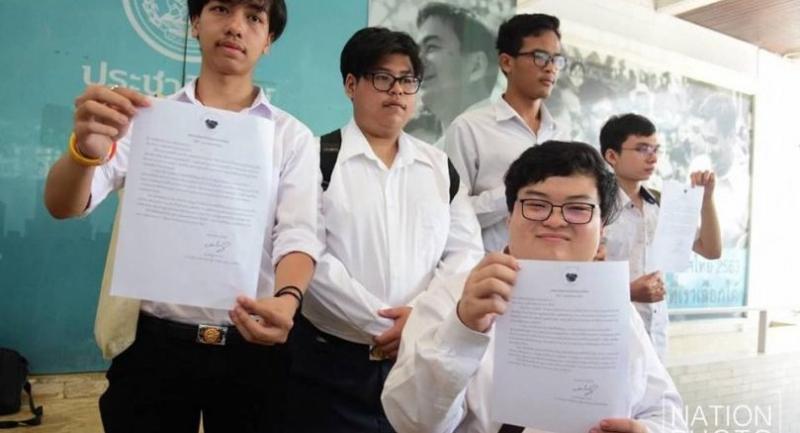 The Student Union of Thailand on Monday lodged a petition with the Democrat Party, calling for it to join a proposed coalition government led by the Pheu Thai Party.

The union was represented by its president, Parit “Penguin” Chiwarak, and about 10 members.

Parit told reporters that the Democrats joining a Pheu Thai-led government would be the only way to end the continuation in power of Prime Minister Prayut Chan-o-cha, via the Palang Pracharat Party, following the general election.

Palang Pracharat has nominated Prayut as its sole prime-minister candidate for the next government.

Pheu Thai, known for being allied to self-exiled ex-PM Thaksin Shinawatra, earlier announced that it and other parties were ready to form a coalition government, having signed a pact mainly to try to stop Prayut hanging on to power.

Palang Pracharat, which according to unofficial results won the popular vote, has also vowed to form its own coalition.

The Democrats, which suffered huge losses in their strongholds in the South and Bangkok, have since the election remained silent on whether the party would join either of the potential coalition governments or be in the Opposition bloc.

Parit said the student union’s petition, which was addressed to Jurin, claimed that if the Democrats opted to be an Opposition party as recommended by its younger politicians, known as Young Dem, such a move would also indirectly help Prayut and Palang Pracharat hold on to power.

He called for the Democrat Party to reach a decision and announce its intentions as soon as possible.

“Although I’m not a member of the Democrat Party and was not one of 3.9 million who voted for the party in the election, I take this opportunity as a member of the public to call for a political party to have a clear position,” he explained.