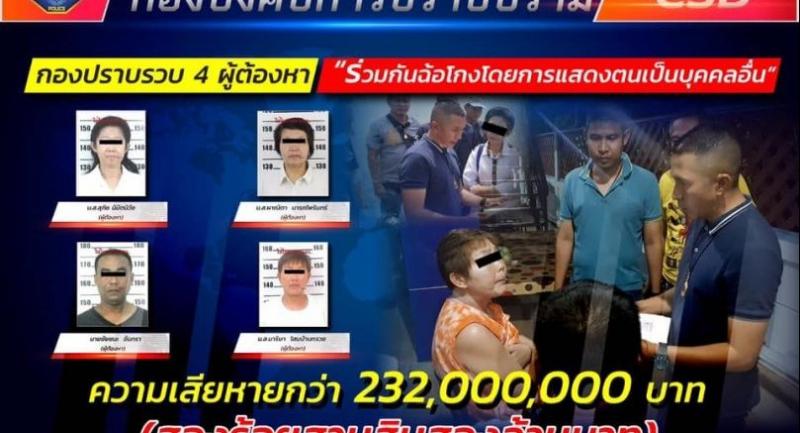 Three women and a man have been arrested for allegedly duping a victim of some Bt233.91 million for a share in a fake Bt1-bllion legacy.

Crime Suppression Division commander Pol Maj-General Jirapop Phuridej announced the arrests of the four suspects, who were nabbed in Ratchaburi, Pathum Thani and Suphan Buri provinces on Monday, at a press conference on Tuesday.

Jirapop said the four suspects invented a story that a doctor, who had volunteered to work in Yala province, was killed in a bomb explosion and had left behind a legacy worth Bt1 billion for Phanita.

Supit approached the victim in 2016, telling her that she would help Phanita handle the legal process to claim the Bt1-billion legacy from the Army.

Supit left two cheques with the victim but told the victim not to cash them yet.

The victim became suspicious and was about to file a complaint with police, when Chaichaina and Marisa, pretending to be two Army officers, called her and affirmed that the legacy did exist.

Supit then arranged a meeting between the victim and Phanita and the two fake Army officers at a temple in Nonthaburi province where she was convinced that she would get a big share once the Army released the legacy to Phanita.

Before the victim realised she was being duped, she had already transferred Bt232.91 million to the gang in 597 transactions.

The four were arrested under a warrant issued by the Nakhon Pathom court dated March 21.