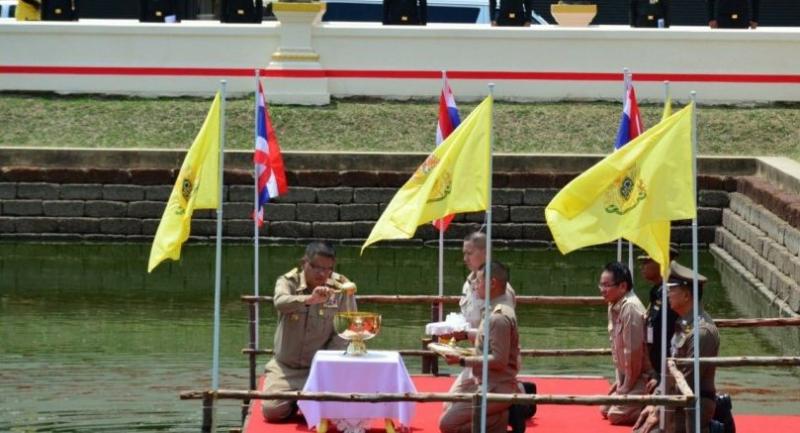 Buri Ram Governor Theerawat Wuttikul collects sacred water from Wat Klang in a rehearsal on April 3. The actual ceremony of collecting water from 107 different sources in 76 provinces will take place on Saturday.

Sacred waters from across the nation will be used to purify, anoint the monarch The central act in the coronation of monarchs in most countries where royalty is retained is the placing of the crown on the head. In Thailand, however, the heart of the ritual is water-based and twofold – the purification bath known as Song Phra Muratha Bhisek and an anointing with sacred water, the Abhisek.

When His Majesty King Maha Vajiralongkorn formally ascends to the throne as King Rama X in a series of ceremonies from May 4 to 6, the first day will hold the most significant rituals.

On the same day he will attend the purification bath and be anointed, as well as being presented with the crown and royal regalia, including the nine-tiered white umbrella that is the supreme symbol of the sovereign.

The water to be used in the purification bath is being collected starting this weekend from five key rivers around the country and from four ancient ponds in Suphan Buri.

The rivers – together referred to as Bencha Suttha Khongkha and representing five rivers in India, origin of these traditions – are the Bang Pakong, Pasak, Chao Phraya, Ratchaburi and Phetchaburi.

For the anointing, the water will be drawn from 107 different sources in 76 provinces and from the Satrakom Hall in the Grand Palace. The water from all sources will be ritually consecrated at the principle temple in each province on Monday.

The monarchs of Thailand have always been revered as divine or at least semi-divine beings, in accordance with Hindu tradition.

Venerable Brahmanist texts stipulate that the water used to bathe and anoint monarchs must come from the Pancha Maha Natee, the collective name for India’s five main rivers – the Ganga (Ganges), Mahi, Yamuna, Aciravati and Sarabhu.

All of these rivers flow from Mount Kailash, which Hindus regard as the physical embodiment of mythical Mount Sumeru, epicentre of the universe and abode of the god Shiva.

In Thailand, the water collected in each province will be kept in a long-necked vessel, which the governors of those provinces will carry to the Interior Ministry in Bangkok on Wednesday.

The collecting of water from Satrakom Hall at the Grand Palace will occur separately, next Friday at precisely 2.09pm, the moment deemed most auspicious, and then it too will be taken to the ministry.

On the morning of April 18, all of the water will be carried in procession from the ministry to Wat Suthat Thep Wararam for consecration. Phitsanulok Governor Pipat Ekkaphapan collects sacred water from Songhong Pond inside the Chan Paland in a rehearsal on April 4. The actual ceremony of collecting water from 107 different sources in 76 provinces will take place on Saturday.

His Holiness Somdet Phra Ariyavongsagatayana the Supreme Patriarch and Prime Minister Prayut Chan-o-cha will lead the sanctifying ritual that evening.

“King Rama I had Wat Suthat built in 1809 to symbolise Mount Sumera after he established Krung Rattanakosin, whose name represented the heaven of the deity Indra,” explained Professor MR Suriyavudh Suksvasti, referring to the new Siamese capital now best known as Bangkok.

Suriyavudh, an art historian who chairs a sub-committee charged with sharing information about the coronation, was briefing reporters at the Government Public Relations Department.

On April 19, the now-consecrated water will be taken to the ordination hall at the Temple of the Emerald Buddha, commonly called Wat Phra Kaew but officially named Wat Phra Sri Rattana Satsadaram.

The three-day coronation itself begins with the purification bath and the anointing and the crowning and investiture in the morning.

His Majesty will then grant an audience to members of his family and high-ranking officials. He will remain at the Grand Palace overnight, symbolically taking possession of it as the royal residence.

On May 5, the royal name will formally be bestowed and new titles given to members of the Royal Family, after which there will be a royal procession from the Grand Palace to Wat Bovoranives, Wat Rajabopidh and Wat Phra Chetuphon. At each temple, respects will be paid to the primary Buddha statues and the ashes of former kings and queens.

May 6 brings a grand audience for foreign diplomats and the general public.

Then, in late October, tens of thousands of people will line the banks of the Chao Phraya to watch a royal barge procession carrying His Majesty to Wat Arun for the kratin ceremony. Marking the end of the Buddhist Lent, it involves the presenting of robes to monks.

The National Legislative Assembly acknowledged his accession in November that year, recognising him as the 10th monarch of the Chakri Dynasty.

It comes almost 70 years after |the last royal coronation in Thailand, that of King Bhumibol himself in May 1950.