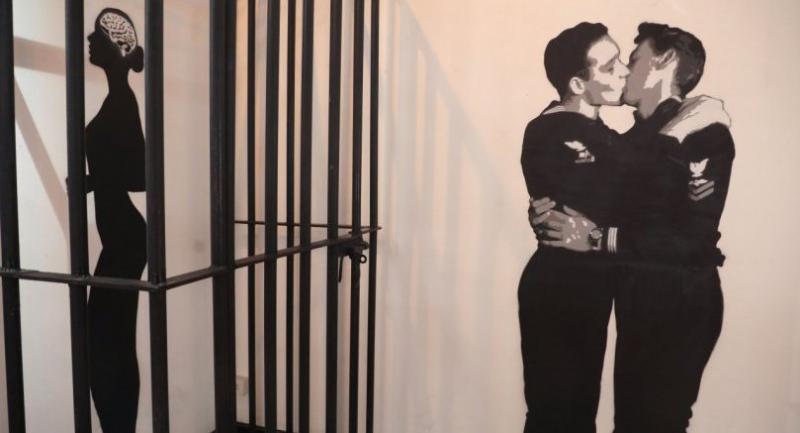 ‘It’s complicated,’ says the artist who got Prayut and Thaksin to ‘shake hands’, now tackling other issues

Patpong , Bangkok’s most notorious red-light area, seems a likely enough place to provoke a discussion about sexual attitudes in this country. Even better, have the discussion at Candle Light Studio, a new gallery for naughty art above the Barbar Fetish Club on Patpong Soi 2.

The provocateur is the masked graffiti artist who calls himself Headache Stencil, fresh from skewering the junta government and chaotic election in his previous show, “Thailand Casino”.

The ascent to the third floor entails passing young ladies dressed in sexy cosplay outfits, who beckon passers-by inside to watch decent folks paying indecent folks to spank them. Once you reach the gallery, though, everything gets very dark very fast.

Headache Stencil has spread his edgy art around two rooms. In the first, it’s all about issues related to sex. He’s painted the walls with women in bikinis and university uniforms with dollar signs and there’s a mural of penises – in pastel blue for some reason.

Keep looking. There’s a stencil of a sexy woman with a formidable brain in a jail cell, and another of two male naval officers kissing. “It’s an open secret that prostitution and drugs, despite being illegal, are widespread in Thailand,” Headache told The Nation Weekend. “But the issues that affect the lives of sex workers and drug addicts are quite complicated.”

The Prevention and Suppression of Prostitution Act 1996 and Article 286 of the Criminal Code seek to handcuff the sale of sex, pimping and running “prostitution establishments”.

The laws don’t seem to be working, though. It’s been variously estimated that anywhere from 800,000 to more than two million Thais earn money as prostitutes, and many of them are under 18.

“It used to be that sex workers were all poor and uneducated, but now in our capitalist-consumerist era, many college students are getting into the sex trade because they want money to buy mobile phones, brand-name clothes and even cars and condos,” Headache said. The victims of society

In a stunning installation that forms the show’s centrepiece, he’s stacked up a pile of naked dolls smeared with blood, the word “victims” sprayed on the platform.

“Women are regularly raped or sexually harassed in Thailand,” he said. “Some die as a result, but they all suffer in some way. They’re the victims.”

On to the next room, where the subject is drug abuse. Headache’s done a black-and-white stencil of da Vinci’s “Last Supper” on one wall, but with a 3D table that’s set with a feast of street dope. On the menu are ecstasy, yaba, cocaine, amphetamine, Xanax and LSD – none of it real, officer. You have glass pipes as well, plus a bottle of whisky for good measure. Also, stencilled skulls!

The litany of drugs appears on another wall alongside a portrait of a boy holding a marijuana bong. “It’s like the last chapter in an addict’s life,” explains the artist, who admits he’s done some sampling. “Overdosing on drugs really is the ‘last supper’ before you die.”

As well as harming themselves, however, drug addicts and drunks also plague society with crimes committed to fuel their habits, he said. For teens, the issues are far more complicated, and the government needs to handle the matter carefully.

“The government should separate the addicts who commit crimes from those who are just sick and get the latter proper treatment.

“Both the sex trade and the drug trade are complicated. We need sustainable and realistic alternatives. We need to bring these people back into society.”