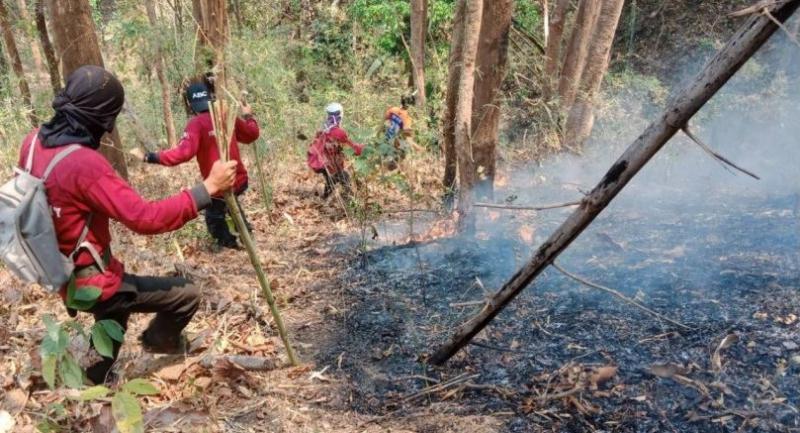 With forest fires persisting in much of the nation’s North, the Mae Hong Son provincial governor has threatened to escalate the campaign against farmers lighting fires to clear farmland.

While leading a team on Monday to inspect efforts in Mae Sariang and Sop Moei to reduce haze causing forest fires, the governor, Sirirat Chumuppakan, threatened to withhold a land-demarcation survey service required for issuance of land-rights documents from any farmers whose lands had fires.

As well, he said that the presence of a large number of hot spots in a village or tambon would affect the authority’s future considerations about providing them with infrastructure such as electricity and roads.

Sirirat also urged officials to investigate to identify and arrest those starting forest fire so they could face a severe punishment.

He also emphasised the importance of ongoing monitoring and weekly updates throughout April for the most at-risk communities of Tambon Mae Khong, Sao Hin and Mae Yuam in Mae Sariang, and Tambon Mae Sam Lap in Sop Moei.

Sirirat presented drinking water and other commodity goods to those fighting the forest fires.

The Geo-Informatics and Space Technology Development Agency’s fire monitoring system as of Monday cited 233 hot spots in Thailand, of which 108 were in the North, 51 in the Central region, 47 in the Northeast, 17 in the West, six in the East and four in the South. Most of these fires were in forestlands.