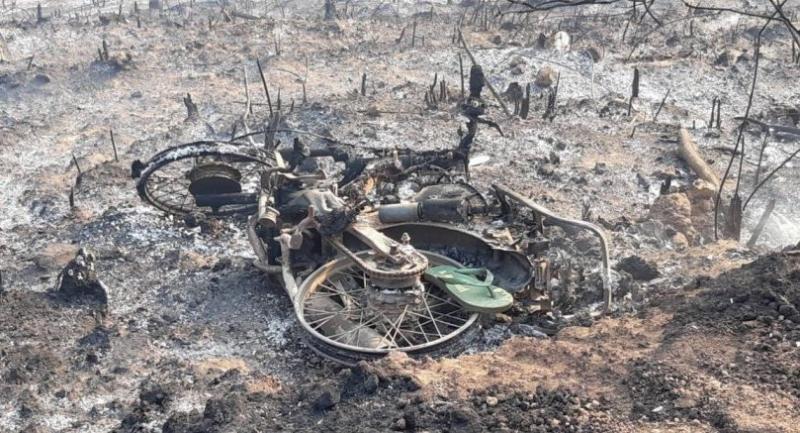 A 50-year-old motorcyclist, who died when he encountered an out-of-control forest fire on a dirt road in Mae Hong Son’s Khun Yuam district on Sunday afternoon, was not drunk as previously reported, officials said on Tuesday.

In fact he had been on his way to help the authorities put out the fire, not just returning to his farm, they explained.

On Sunday afternoon, police found Burin Thaweekijbowornkul’s lifeless body 10 metres from his toppled and burned-out motorcycle on the road at Mae Or (Moo 3) village in Tambon Mae Yuam Noi, where he came across the blaze, reportedly succumbed to smoke inhalation and died.

In previous Thai news reports, Burin was said to have to be in a drunken state after having drinks with friends before setting out on his journey, an account which his relatives and the local authorities have now dismissed.

Tambon Mae U-Khor Administrative Organisation member Somchai Kichakornrungroj said on Tuesday that he, Burin and Burin’s younger brother Thanomsak Thaweekijbowornkul heard a report of a forest fire near a farm belonging to Burin’s father so they travelled on separate vehicles to offer help.

As they were neared their destination, another forest fire aty the back of the farm sent thick smoke billowing in front of Burin’s bike, suffocating him and rendering him unable to get away, he said.

The report of Burin being drunk had tarnished his family, which was now without its breadwinner and in need of aid, Somchai said. Burin, a member of a local network keeping watch for forest fires, left behind his mute wife and their two children.

This account of Burin dying while on a help-offering mission was confirmed by Khun Yuam district chief Narongchai Jindapan, who cited a report of this incident by a Mae Or village headman.

A resident in Tambon Mae U-khor, Noi Khongkhetkhram, 66, verified the account of Burin dying while on his way to help put out a forest fire. He said Mae Hong Son had suffered from several forest fires recently so villagers had been asked to aid officials to put off fires in their areas, on a voluntary basis and without pay.