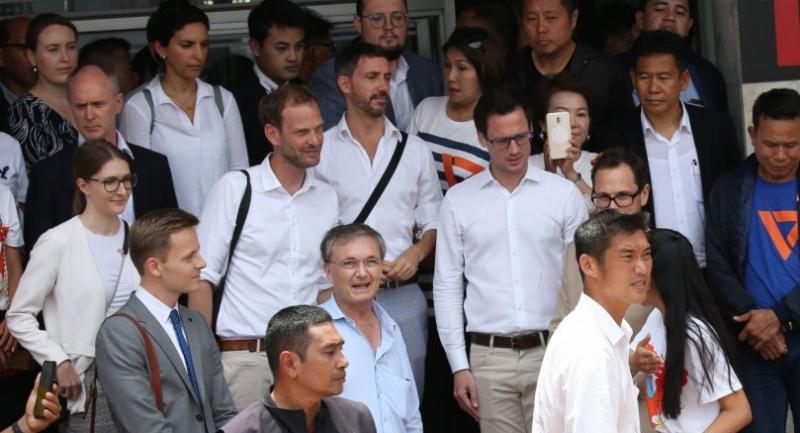 Future Forward Party co-founder and leader Thanathorn Juangroongruangkit (R) stand next to an observer from a foreign embassy after meeting with police at the Pathumwan Police Station in Bangkok, 06 April 2019. // EPA-EFE PHOTO

THE FOREIGN MINISTER yesterday slammed a group of foreign diplomats for showing up at a Bangkok police station to witness the interrogation of Future Forward Party leader on April 6.

Thanathorn Juangroongruangkit was officially hit with three charges, including sedition for an offence he allegedly committed in 2015.

“The acts of those foreign diplomats can be considered as diplomatically inappropriate and not in line with the United Nations’ diplomatic principles.

“They can only get involved in the Thai justice system if their citizens are accused and charged for committing offences in Thailand. In that case, they have the absolute right to get involved in questioning and the legal process,” Don Pramudwinai said.

He added that nobody would be allowed to do this in their countries, so he wondered why the diplomats thought they could do this in Thailand.

A group of foreign envoys, including a UN official, showed up at Pathum Wan Police Station on April 6 when Thanathorn faced official charges.

The diplomats were later seen shaking hands and taking pictures with Thanathorn at the stairs of the police station.

Thanathorn later posted two photographs showing the diplomats sitting in a room with chief investigator Pol General Srivara Rangsibhramanakul at the top of the table and Thanathorn near him.

The caption read: “Observed by the UN, the EU and 11 other foreign embassies, including the US Embassy during my interrogation by the deputy commissioner of Thailand.”

Srivara, who is also deputy National Police commissioner, said yesterday that the diplomats did not attend the questioning session, but that he had invited them for a briefing later on.

Don reiterated that the diplomats should not have done this, adding that if they wanted to gather information about the case as they claimed, they could have done so without attending the questioning session.

Don said his ministry would explain its concerns to the countries whose diplomats showed up, but added that he was considering whether to “invite” them for talks verbally or with a letter. Asked if the envoys have the right to show up, if invited by a Thai individual, Don said: “No, they are not. The individual in question could not invite them to engage in our justice system.

She added that the party has good ties with the ambassadors of the US, Canada and the European Union and that the party knew in advance that their diplomats would be attending the questioning session.

She defended the diplomats, saying they were aware of the protocol but decided to attend the session any way, because they believe the sedition charge is severe.

The diplomats were also concerned because this action is being used against a political leader who has just made his debut and his party has unofficially gained some 80 seats in Parliament.