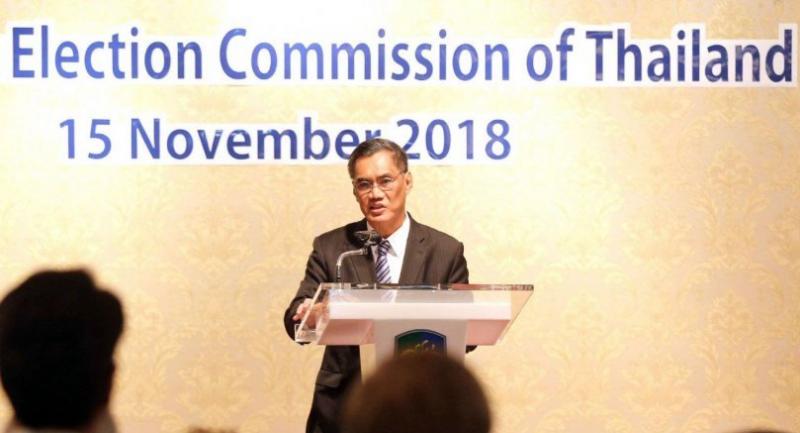 AFTER DAYS of debate and dispute over the right formula to calculate MP seats, the Election Commission (EC) president said yesterday that the agency was considering approaching the Constitutional Court to seek its opinion.

EC chief Ittiporn Boonpracong yesterday told reporters a Constitutional Court judgement is among the options the commissioners are looking at.

He said the agency has yet to decide on the formula that it will use to calculate MP allocation.

The EC was studying the similarities and differences between the stipulations in the Constitution and the organic law on MP election, Ittiporn said, adding that the EC had an initial calculation model, but was yet to make the final call.

The model Ittiporn was referring to would allocate seats to 11 small parties who did not gain even half the number of votes required to be allotted a seat in the Lower House. This method was backed by Praphan Naikovit, a member of the now-defunct Constitution Drafting Commission and an ex-EC member, who said the formula had been tested, tried and finalised when the Constitution and the organic law were being written.

Tentative calculations currently show that a party will need at least 71,000 votes to get an MP seat. Proponents of this calculation model cited the Constitution, which says no party should get a seat it is not entitled to. They also argue that handing out seats to small parties would be at the expense of larger parties.

Future Forward Party, which has won over 6 million votes nationwide, could potentially lose up to seven seats.

Popular winner Phalang Pracharat, which supports coup leader General Prayut Chan-o-cha’s return as PM, would also lose two or three MPs in Parliament. However, it is expected to reap dividends from the 11 small parties offering their support to form a coalition government.

The poll authority has been heavily criticised and accused of manipulating the maths to favour pro-junta parties.

While the authority said that giving small parties places in the House would reflect the Constitution’s intention to make every vote count, the method poses a challenge for the pro-democracy camp, which is struggling to muster 250 MPs to form a coalition and block the junta from future politics.

Pheu Thai Party has been striving to prove that the calculation method would be unconstitutional. Yesterday, party executives and legal experts met and agreed that they would discuss the MP-seat calculation in the annual general assembly on April 21, the first Monday after Songkran holidays.

The party’s legal chief, Chusak Sirinin, yesterday also read a party statement on the calculation issue, reiterating that the current EC method would be unconstitutional.

In order to secure one seat in the House of Representatives, Pheu Thai insisted that a party must gain at least 71,065 votes.

The number is the product of all the votes obtained by all parties (35,532,647) divided by the number of the seats available in the House (500).

Since the number of MPs already exceeded 500, as Pheu Thai had won more constituencies than the formula required, it would be impossible for the small parties who gained less than 70,000 votes to be in the Lower House, Pheu Thai stressed.

It also submitted an official letter to the EC yesterday, asking it to reconsider the calculation method.

The party’s secretary-general, Phumtham Wechayachai, said the move was necessary in case the party had to pursue legal action against the agency.

In a related development, the Thailand Students Union filed a lawsuit against the EC yesterday for alleged negligence after numerous irregularities occurred during the March 24 election.

This criminal case is in addition to a case brought before the National Anti-Corruption Commission by other activists demanding the impeachment of EC commissioners over alleged irregularities in the conduct of the election.