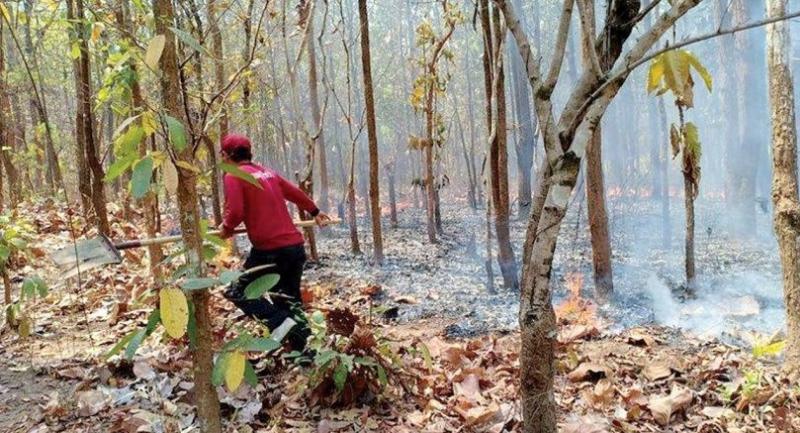 With no rain in sight and low winds, officials advise people to stay indoors.

TOMORROW, the first official day of Songkran, will see a higher level of air pollution in the North, hence people are advised to wear masks and avoid going outdoors, a source at the Smoke Haze Integrated Research Unit (SHIRU) said yesterday.

The Chiang Mai University-based research unit said this prediction was based on the GEOD-5 Model, which forecast low winds on that day, and the fact that there are still some hotspots in the region and across the border, so smog is expected to hit the region. Methee Mahayotsanan, director of the Northern Meteorological Centre, said the westerly winds, blowing some 700 metres above ground, should be strong enough to blow away the haze, but low-lying breezes are not strong enough to scoop up the fine dust particles for it to blow away. Also, he said, low-lying winds were also being blocked by the region’s mountainous geography.

Since there has been no rain in the North and hotspots across the border keep blowing smog into Thailand, there is a chance that air pollution in the region will worsen, he added.

This prediction is not far-fetched, because as of Wednesday afternoon, Mae Hong Son had 145 hotspots – 28 each in the districts of Sop Moei and Mae Sariang, nine in Mae La Noi, 21 in Khun Yuam, 23 in Muang, five in Pang Mapha and 31 in Pai.

Pongpira Chuchen, chief of Mae Hong Son’s Muang district, said a special task force had surveyed the water sources in the area and come up with an effective plan to use helicopters to help douse fires in steep mountainous areas. So far, water-carrying helicopters have flown over Mae Sariang and Sop Moei districts 300 times.

Meanwhile, the Department of National Parks reported via Facebook that forest-fire responder Wichien Panures, who suffered a stroke while fighting a blaze in Lampang on April 9, passed away at 5.18am yesterday. His funeral will be held in his hometown in Nakhon Ratchasima’s Pak Chong district.

The quality of air remained poor in Chiang Mai – which ranked first with an air quality index (AQI) of 214 in the airvisual.com ranking of the world’s worst polluted cities as of 1pm yesterday – followed by Bangladeshi capital Dhaka (183) and Lahore in Pakistan (176). Chiang Mai and eight northern provinces recorded dangerous levels of PM2.5 – airborne particulates 2.5 microns or less in diameter.

The Pollution Control Department at 9am put the 24-hour average of PM2.5 between 63mcg and 152mcg in nine northern provinces. The Thai safe limit is 50.