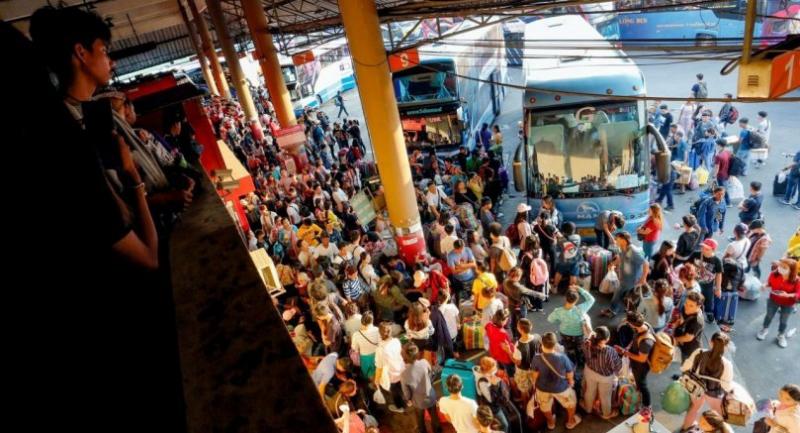 Bangkok bus terminals see increasing crowds of people leaving the capital for the provinces to celebrate the traditional Songkran New Year this weekend.

AIRPORTS, ROADS and border checkpoints were clogged yesterday as hundreds of thousands of people began leaving Bangkok for Songkran holidays, thinking in vain that they would be avoiding heavy traffic.

Don Mueang Airport was more crowded and queues of people waiting to check-in were longer than usual.

“We estimate that the number of passengers will rise by 18 per cent during the Songkran holidays from April 11 to 17,” Don Mueang Airport director Sirote Duangratana said yesterday. “The airport will be handling 830 flights per day during this period.”

Traffic leading to and from the airport was heavy, so officials kept announcing that passengers should check their luggage and jump out of their vehicle immediately. Suvarnabhumi International Airport, despite being bigger than Don Mueang, was similarly jam-packed.

As for roads, Nakhon Ratchasima – a gateway to the Northeast – suffered severe traffic congestion since yesterday morning. Tailback on the outbound lanes of Mitrapab Road between Nakhon Ratchasima’s Pak Chong and Sikhiu districts stretched over 39 kilometres, so police had to turn one inbound lane into a special outbound one in order to improve traffic flow.

In Nakhon Ratchasima’s Muang district, traffic between Pak Thong Chai intersection and an elevated bridge was more than 10 kilometres long.

Northbound traffic, meanwhile, began building up on Highway 32 (Asian Highway) in Chai Nat province. Though there was not a traffic gridlock yesterday, roads are expected to be congested this afternoon, local highway officials said.

Since most Thai businesses close during the long Songkran holidays, thousands of migrant workers rush back home as the festival is also celebrated in Myanmar, Laos and Cambodia.

Due to this, the border checkpoint in Tak’s Mae Sot district, which sits on the border with Myanmar, was swarming yesterday. People, most of them workers who travelled from Bangkok and other provinces, stood patiently in a queue longer than 300 metres to undergo immigration procedure.

While Songkran is usually associated with fun, it has always had a dark side – with millions travelling, road accidents and deaths are high during his period.

Hence the authorities have launched campaigns, reminding people to be extra careful on roads. This year, the Seven Dangerous Days associated with Songkran began yesterday and will end on April 17.

A Dutch tourist was among the fatalities recorded on the first day of the dangerous week, with police saying the accident took place at an intersection in Kanchanaburi’s Tha Muang district at 3am.

Police said the tourist’s car hit the rear of a trailer truck that was about to clear the intersection. He died at the scene.