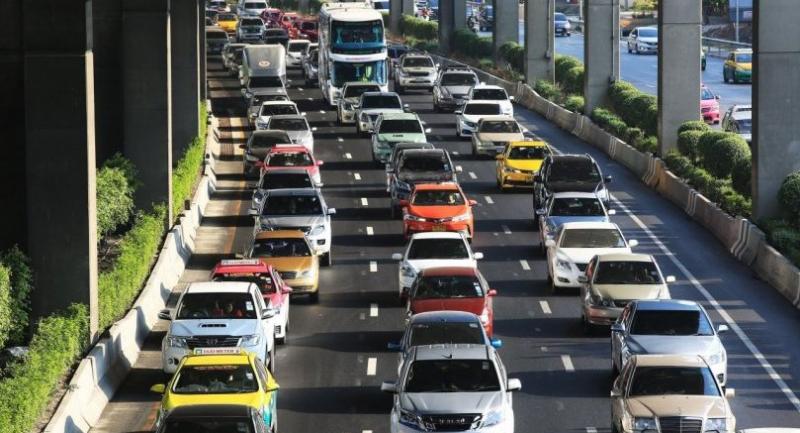 Bangkok streets are jam-packed with cars as locals head out of town for Songkran. Nation/Ratchanon Intharaksa

Drunk driving, speeding behind most of the 468 crashes nationwide, says minister

Thursday – the first of the “Seven Dangerous Days” of Songkran 2019 – saw 46 people killed and 482 injured in 468 road accidents, Transport Minister Arkhom Termpittayapaisith told reporters at the Road Safety Centre in Bangkok on Friday.

Of the 20 accidents nationwide, Nakhon Ratchasima recorded the most crashes and the highest number of injuries at 23, while Udon Thani had the most fatalities at four. Arkhom said most accidents involved drunk driving (34.6 per cent) and speeding (26.9 per cent) and warned that drunk drivers involved in fatal crash would certainly be jailed.

He said 667,000 people left Bangkok on Thursday alone – the largest single-day exodus for Songkran on record.

The minister added that the Songkran safety campaign aimed to make drivers observe speed limits, keep their headlights on and wear seatbelts or helmets if on a motorcycle. Arkhom noted that all public-transport vehicles have GPS, so they can be monitored for speeding. Also, each vehicle’s condition is inspected and drivers routinely checked for sobriety.

Police and officials have set up 2,036 road checkpoints across the country during the Songkran period, and 709,464 vehicles had been stopped with 163,584 motorists facing legal action for traffic rule violations as of press time.

Of the offenders, 45,230 were on motorbikes without helmets, while 41,485 drove without a licence.

Courts of justice spokesman Suriyan Hongwilai said a total of 1,609 cases involving traffic violations were sent to lower courts on Thursday, and they have ruled on 1,609 or 73.8 per cent of the cases.

Most of the cases involved drunk driving (1,106), followed by driving under the influence of drugs (314). Other charges include driving without licences. Of the 1,704 defendants prosecuted in court, 1,661 were Thai nationals and 43 foreigners, the Courts of Justice spokesman.

Meanwhile, six people including a 14-year-old boy were killed and four injured in Lop Buri early on Friday when a train slammed into a van carrying 14 holidaymakers from Bangkok to Ubon Ratchathani.

The 2.45am crash took place in Pattana Nikhom district at a railway crossing on Highway 3017, barely 3 kilometres from Kaeng Sua Ten Train Station.

Pol Colonel Krit Saengpol said the van was speeding across the railway cross, when it was hit by the Nong Khai-Bangkok train and flung against a concrete barrier, instantly killing two male passengers aged 28 and 60, and two women aged 18 and 28.

The 14-year-old and a 41-year old man succumbed to their injuries later in hospital. The driver and four other passenger sustained minor injuries. Police will question the driver later.

According to JS100 traffic radio, the van had been driven round the barrier arm as the train was approaching. A bridge is being built over the track at the crossing and it was dark at the time.

Krit said the force of the impact threw the van off the crossing and into a concrete barrier on the roadside.