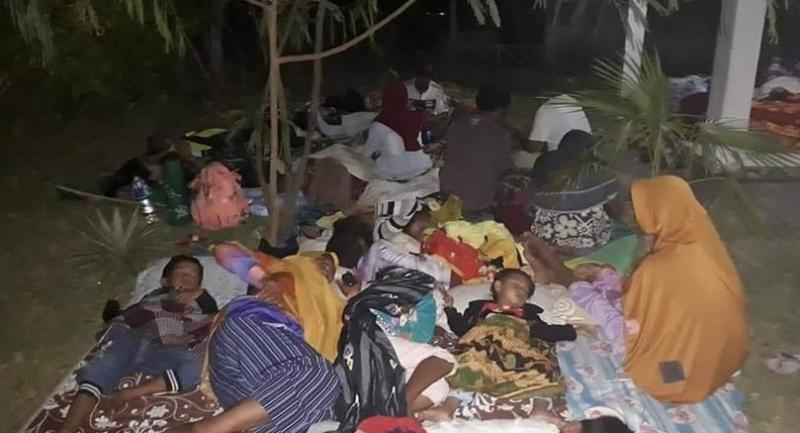 Photo shows residents in Banggai gather in the open after a strong 6.8-magnitude earthquake rocked eastern Indonesia on April 12, reportedly killing one person and triggering a brief tsunami warning.//AFP

Luwuk, Indonesia - Some panicked residents of a quake-hit Indonesian island have refused to return home after the tremor triggered a brief tsunami warning and fears there was more to come, the disaster agency said Saturday.

Aftershocks rippled across the east coast of Sulawesi -- an island where thousands were killed in a quake-tsunami last year -- as officials scrambled to assess whether there are any casualties or major damage.

While one resident of quake-hit Luwuk city reportedly died after falling while trying to flee, the agency has not reported any confirmed deaths or injuries.

An AFP reporter in the city said there were no signs of major property damage.

"The situation is returning to normal," the disaster agency said early Saturday morning.

Some 1,300 families have returned home, it said, adding that some residents of another small island near the epicentre of Friday's 6.8 magnitude quake were still refusing to return from higher ground.

It did not say how many residents had refused to leave the high ground.

Luwuk resident Emiliana Rumayer said she and her family slept in the hills overnight "but we've now returned home".

Mohammad Sholeh, police chief of Poso city on Sulawesi, said the quake's impact there had been minor.

"There's a little bit of damage, but nothing significant and there are no casualties," he said.

On Friday, a tsunami warning was issued for coastal communities in Morowali district, where residents were advised to move away from the coast.

The warning was later lifted by the disaster agency, which had estimated the wave at under a half a metre (20 inches).

Video footage from Luwuk showed scared residents -- some carrying children -- running from their homes and racing to higher ground on motorcycles.

The quake struck at a relatively shallow depth of 17 kilometres (10 miles) off Sulawesi, where a 7.5-magnitude quake-tsunami around the city of Palu killed more than 4,300 people last year.

Residents of Palu, which is hundreds of kilometres away from Friday's epicentre, still felt the quake.

Indonesia is one of the most disaster-prone nations on Earth due to its position straddling the so-called Pacific Ring of Fire, where tectonic plates collide.

On Boxing Day 2004, a 9.1-magnitude earthquake struck westernmost Aceh province, causing a tsunami and killing more than 170,000 in Indonesia.

Last year Indonesia experienced more than 2,500 disasters ranging from a series of deadly earthquakes to killer landslides and volcanic eruptions.