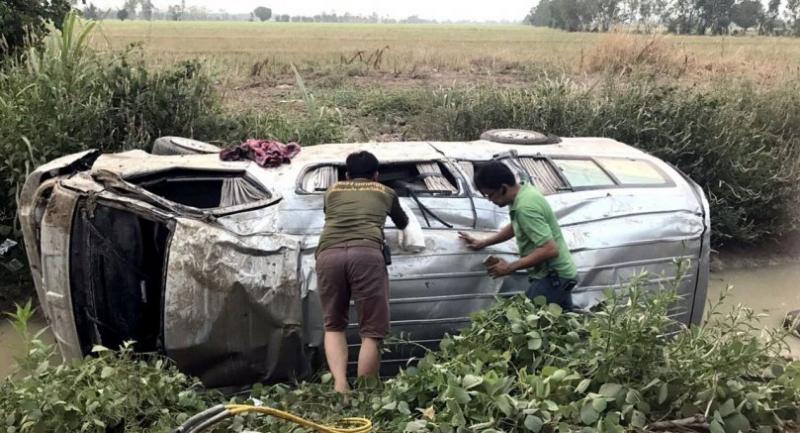 The number of road accidents saw a sharp increase on the third of the “Seven Dangerous Days” of Songkran this year, as more people were found to be driving under the influence of alcohol besides being guilty of speeding.

The Road Safety Operations Centre (RSOC) yesterday revealed that 700 accidents had been recorded in the 24 hours of Saturday, killing 67 persons and injured 733. Drunk-driving and speeding remained the biggest causes of death during the festive season. Local authorities have been ordered to impose even stricter law enforcement to prevent traffic accidents during the rest of the Seven Dangerous Days. Cultural Promotion Department director-general Chai Nakhonchai revealed that deaths from road traffic injuries had reached 174 yesterday, while the number of injuries were at 1,728 from 1,665 recorded accidents during the first three days of the annual road safety promotion week.

Though Thailand’s roads were comparatively safer than the previous year at this stage, with a decline in the number of deaths, injuries and accidents, the data still underlined persistent dangerous behaviour resulting from drunk-driving, which remains a major factor behind the deadly traffic accidents.

Chai said that since people had started Songkran celebrations – splashing water on the streets and partying with alcohol – traffic accidents had seen a steep spike, especially on minor roads. Some 700 accidents were reported yesterday alone, compared to the number of accidents on the first two days – 467 and 498 respectively.

It was also revealed that 81.08 per cent of traffic accidents involved motorcycles, while 63,196 motorcyclists were arrested for not wearing a helmet.

He said the RSOC has ordered police in each locality to go for stricter enforcement of the laws and look for dangerous driving behaviour such as drunk driving and speeding.

Thanapong Jinvong, manager of Road Safety Group Thailand, said yesterday that the number of deaths from road accidents between April 11-13 dropped to 174, down 17.14 per cent from the same period last year.

He also raised concern over weak law enforcement by the Criminal Court.

Although the government has a policy to impose heavy penalties on drunken drivers, judges think otherwise, he lamented.

Judges are worried that government guidelines may run against the spirit of law, he said. He pointed out that the penal code stated an accident caused by a drunk driver that causes death is punishable with a jail term of up to 10 years and a fine of Bt200,000.

Most legal cases brought before the court in the past have resulted in jail and fines for wrongdoers. However, the judges often suspended the jail penalty when defendants confessed to their inappropriate actions, he said.

He said Thai court practices do not meet international standards, which imposes severe penalty for drunken driving on the ground of criminal intent.

In Japan, the jail term is between 15 and 20 years and in most cases the court hands down jail terms, because a wrongdoer’s action is deemed to have criminal intent not simply negligence, he said.

In Thailand, regarding drunk driving, the court applies Article 291 of the penal code which states that those who negligently cause the death of other people will be subject to jail terms not exceeding 10 years. “The wrongdoer’s actions are considered to be negligence, according to Thai court practices,” Thanapong pointed out.

“In some cases, Thai courts reject the case filed by policemen and public prosecutors who accuse drunken drivers of criminal intent, because the court considers the actions as simply negligence,” he lamented.

He further said that if Thai courts do not suspend a jail term, the current Thai law is quite adequate. Imprisonments will send a strong message to the public and combined with public education, it is possible to prevent or lessen the traffic crimes committed by drunken motorists, he argued.