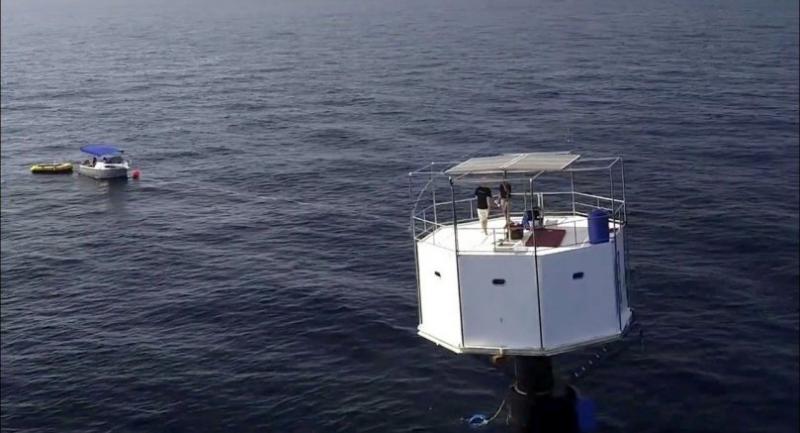 An American bitcoin investor could face the death penalty after Thailand's navy accused him of violating the country's sovereignty by building a "seastead" home off the coast, which he insisted was simply in pursuit of a vision of "freedom".

Chad Elwartowski and his Thai girlfriend Supranee Thepdet, known as "Bitcoin Girl Thailand", are facing charges of threatening the kingdom's independence after authorities found their ocean-based home about 12 nautical miles from shore.

But Elwartowski told AFP their home was 13 nautical miles out, which he said is just outside Thailand's territorial waters.

"The navy and its team... found a concrete tank floating on the sea but there was no one on it," Nikorn told AFP. "So they filed a charge citing criminal code article 119."

If they are officially charged and found guilty, the maximum sentence Elwartowski and Supranee could face is the death penalty.

Nikorn said the navy would have to meet with provincial officials "to consider what to do next".

The Royal Thai Navy said on Facebook the couple "did not seek permission from Thailand" before constructing their home.

Putting a call out to other interested investors also shows "they do not care about Thailand as a sovereign state."

But Elwartowski, who worked as a software engineer for the US military in Afghanistan, Germany and South Korea, told AFP he and Supranee just wanted to live somewhere free.

"I like the idea of being able to vote with your home. If you don't like how your community is being run, you just float to a new one," he said.

The bitcoin-rich couple are part of Ocean Builders, a community of entrepreneurs who aim to build permanent homes in waters outside of government territory.

They had recently called for 20 interested investors for new seasteads to be built around their maiden platform, which is "just outside of Thailand's territorial waters," said Elwartowski.

On April 10, he put out a call for people to invest in an "Initial Seastead Offering" which would have launched on April 15.

The "ISeaO" is now postponed, and Elwartowski said he and Supranee, whose English name is Nadia, just want to live together in peace.

"We didn't do anything on the seastead that was not legal on land but the feeling of being free is just amazing."

Some advocates of "seasteading" believe in creating "competing governments on the high seas", he said.

But Ocean Builders "never took a political stance" on the homes' purpose.

"That was for the customers to decide," he said.

The couple is now hiding in "a fairly safe place".

A statement published Monday on Ocean Builders' website said Elwartowski and Supranee were not responsible for construction of the seastead.