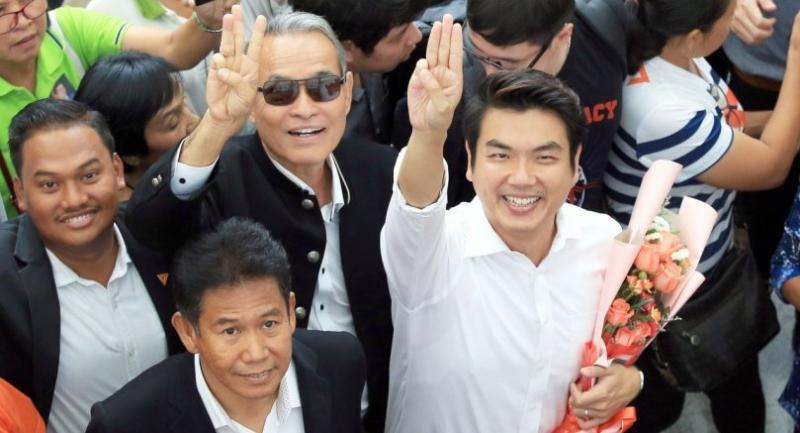 Future forward’s piyabutr pleads innocence and hints his party is being targeted because of its rapid rise.

WHILE MEMBERS of pro-democracy parties continue to be targeted with suspected politically motivated lawsuits, a political scientist yesterday warned this tactic of eliminating political rivals might backfire and lead to a legitimacy crisis later.

In the latest case, Future Forward Party secretary-general Piyabutr Sangkanokkul yesterday acknowledged the charges pressed against him by the ruling National Council for Peace and Order (NCPO), whose chief is a PM contender after the general election last month.

“Seeking advantage over rivals is common in politics. But this cannot be without consequences. They could face questions of legitimacy even if they successfully conspire to attain their goal,” said Attasit Pankaew, a political expert from Thammasat University. “All the unfairness that can be seen right now will lead people to question if [Piyabutr] would have been hit with a lawsuit if he were not so popular in the election.”

The pro- and anti-junta blocs have been going after each other since the election with politically motivated lawsuits.

But it has been observed that one camp may have been hit harder. For instance, when the court was petitioned to seek the disqualification of junta chief Prayut Chan-o-cha as a prime ministerial candidate because he was a public servant, the ruling went in favour of the incumbent.

While these kinds of political challenges are common around the world, Attasit said that public sentiment could play a major role in making any change. “It’s how the public responds to the treatment that could improve this culture,” he said. “Meanwhile, the authority has to provide an explanation and ensure that the due process of law is followed without victimising political rivals.”

While many people are counting on the March 24 election as paving the way for an end to political divisions, the expert warned that the relentless unfair treatment meted out to some groups of politicians could make people think the election did not really end the conflict.

Piyabutr has been charged with contempt of court and breaching the computer crime law for reading out a statement in relation to the dissolution of Thai Raksa Chart Party in February.

Piyabutr, a former law lecturer at Thammasat University, yesterday denied the charges. He insisted on his innocence, saying as a law scholar the criticism was meant as an academic comment and that he believed in the justice system.

“The chief of the NCPO is the PM candidate of a political party, which was a rival of Future Forward Party in the election and he has assigned an official to prosecute me for contempt of court,” he said.

“Let me make an observation: the judicial branch is a part of the sovereign state and cannot escape criticism, especially the Constitutional Court which rules on political conflicts and whose judgement is likely to be scrutinised,” Piyabutr told reporters. “Disagreement with a court judgement is not a crime.”

Paying the price of popularity?

Asked about the common perception that his party was being targeted because of its popularity, which helped it win more than 80 seats in the lower house on its electoral debut, Piyabutr said that was one way to look at the development.

“Future Forward was founded last year but we already face a number of charges,” the law professor-turned-politician said.

Piyabutr’s meeting with the Technology Crime Suppression Division yesterday was observed by both international and local rights agencies – the Office of the United Nations High Commissioner for Human Rights and National Human Rights Commission (NHRC).

NHRC observer Angkhana Neelapaijit told The Nation that lawsuits targeting activists, academics and politicians in Thailand in the past five years since the military took power were worrying.

This does not mean that those campaigning for democracy are above the law, but the authority should ensure that the treatment was not judicial harassment or a strategic lawsuit against public participation (SLAPP).

“If they have really committed crimes, they should be punished, of course,” the NHRC commissioner said. “But if it is SLAPP, we have to admit that once they get caught up in the lawsuits, it can really be a burden, making it hard for them to be activists.”