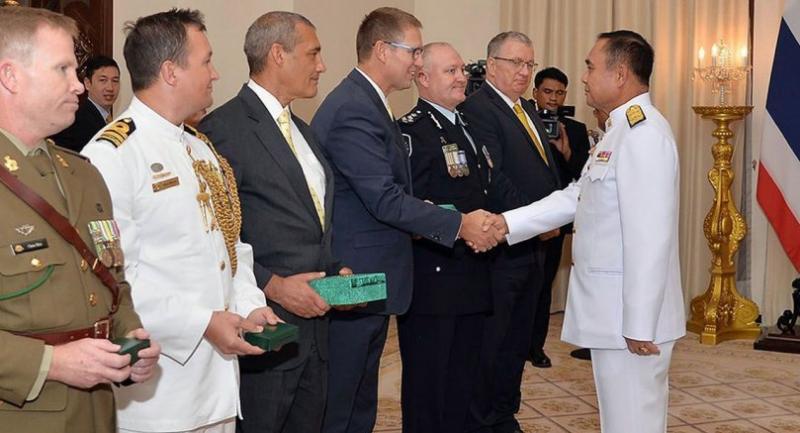 Australian cave divers Dr Richard Harris and Dr Craig Challen received The Most Admirable Order of the Direkgunabhorn at a ceremony in Bangkok on Friday for their crucial role in the Tham Luang cave rescue of 12 young soccer players and their coach.

After attending the ceremony, they also had a meeting Thai Prime Minister General Prayut Chan-o-cha. Australian cave diver Richard Harris being conferred the Most Admirable Order of the Direkgunabhorn in front of a portrait of Thailand's King Maha Vajiralongkorn in Bangkok.

“We had no idea at the time of the rescue that this was going to be such a big story.”

This was the first time that Drs Harris and Challen had returned to Thailand since their crucial contribution to the rescue of the 12 young Wild Boars soccer players and their coach from the Tham Luang cave complex in Chiang Rai almost a year ago. Australian member of the Thai cave rescue team, Craig Challen (R) and Richard Harris (L) talks to the media during an interview at the Ministry of Foreign Affairs in Bangkok, Thailand, 19 April 2019. // EPA-EFE PHOTO

Harris and Challen were also in January jointly named Australians of the Year – one of that country’s highest honours.

The pair will now travel to Chiang Rai and return to the Tham Luang cave site to meet with the soccer team and their families.

“That’s really exciting for us to go and see them, and to make sure they’re well and see how they’re doing after the rescue,” Harris said. Australian cave diver Craig Challen being conferred the Most Admirable Order of the Direkgunabhorn in front of a portrait of Thailand's King Maha Vajiralongkorn in Bangkok.