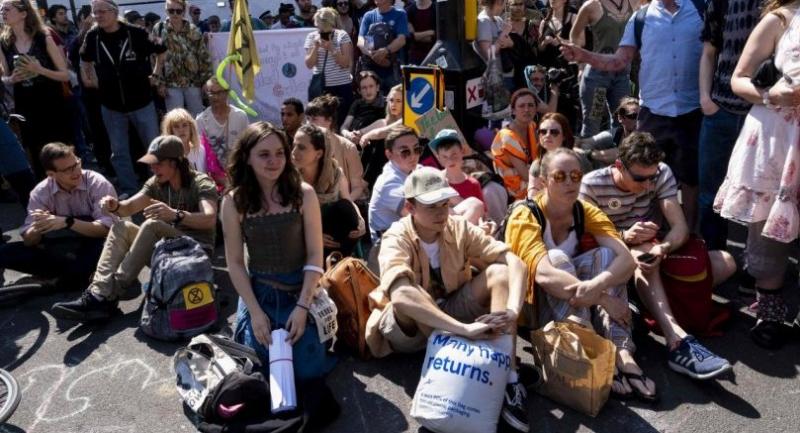 Climate change activists continue to block the road at Oxford Circus in London on April 20, 2019, on the sixth day of an environmental protest by the Extinction Rebellion group./AFP

The Extinction Rebellion environmental protests in London rumbled on into a sixth day Saturday as the total number of arrests hit 718.

Demonstrators were continuing to block Waterloo Bridge in the city and the central Oxford Circus junction despite the removal by police of the pink sailing boat which had acted as a natural focal point for the movement.

Some 28 people have been charged in relation to the protests, which have caused disruption for commuters in the British capital.

The protests are organised by the campaign group Extinction Rebellion, which was established last year in Britain by academics and has become one of the world's fastest-growing environmental movements.

Police have been trying to confine the protests to one site in London, at Marble Arch on the corner of Hyde Park, but the protesters have ignored the threat of arrest and continued to block other sites.

"We are trying our best to give the businesses a chance to return to 'business as usual'," police said.

"One thing that is unusual about this demonstration is the willingness of those participating to be arrested and also their lack of resistance to the arrests."

The large number of arrests has created a "logistical problem" for the police in terms of cell space and also the "wider criminal justice system".