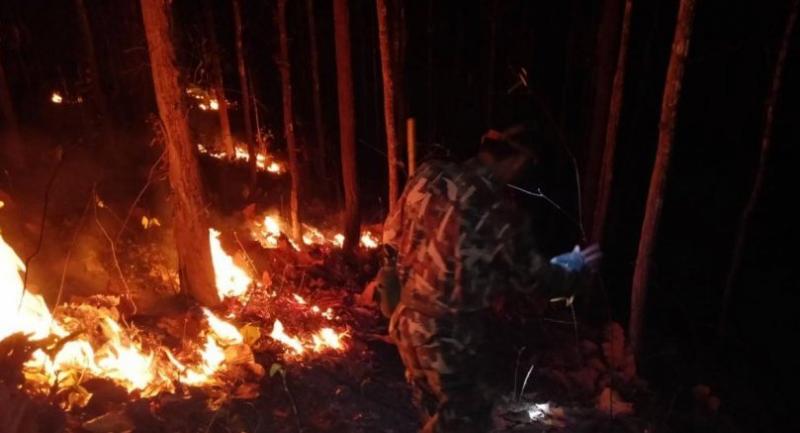 Following a huge drop in the number of hotspots in Mae Hong Son during Songkran, fires have once again taken hold, prompting officials and volunteers to work around the clock on putting out the flames. Particulate dust in the area on Monday was still slightly under the safe limit of 50 micrograms per cubic metre of air. The PCD said in its 9am report on the 24-hour average of PM2.5 that the levels were between 44 mcg and 71 mcg in nine northern provinces. Tambon Wiang in Muang Chiang Rai led the pack with 71 mcg followed by Tambon Ban Tom in Muang Phayao (69 mcg) while Tambon Wiang Phang Kham in Chiang Rai’s Mae Sai district and Tambon Chang Kerng in Chiang Mai’s Mae Chaem district, each cited 67 mcg. The beyond-safety haze in Phayao - which had slightly improved thanks to rain on Sunday evening -was contributing to the 12 forest hotspots. One such spot on Doi Phu Nang National Park in Dok Kham Tai district had been doused at 5pm on Sunday, but not before it damaged 40 rai of forestland, while another forest fire in Jun district ruined 40 rai of conservation forestland in Tambon Hong Hin.