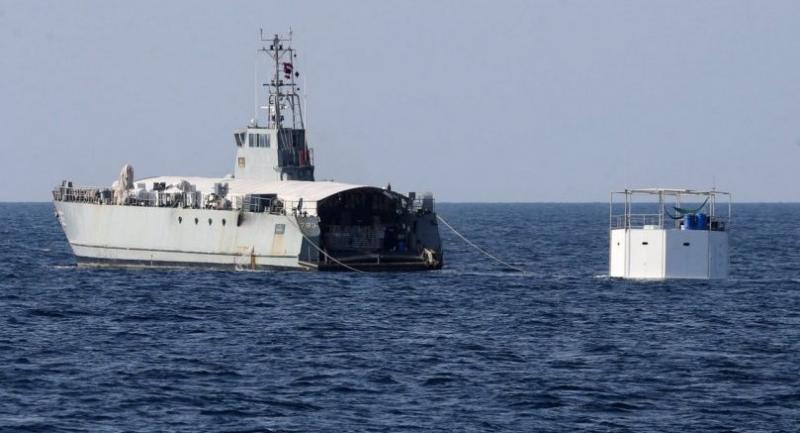 The seastead located at some 14 nautical miles off the coast of Phuket is dragged to the island’s deep-sea port for use as evidence. // Charoon Thongnual

A sea home belonging to an American man has been dismantled and is being towed by naval vessels to the Phuket deep sea port.

Three royal ships and about 300 Navy officers, led by the Third Naval Area Command, were involved in the operation on Monday to dismantle the seastead off the coast of Phuket and take it ashore.

The operation started in the morning and the structure is expected to reach the shore by evening.

The officers started by separating the seastead structure from its pylon and floating pontoon. It will be taken to the Port of Phuket in Cape Panwa, where it will be kept as evidence for legal cases. The floating structure was built by Ocean Builders and was owned by bitcoin investor Chad Andrew Elwartowski and his Thai girlfriend, Supranee Thepdet (aka Nadia Summergirl).

It is located to the southeast of Koh Racha Yai, 14 nautical miles from the mainland.

The Royal Thai Navy said it had full authority and duty to protect national interest and marine sovereignty in the area, as the couple’s seastead was located in Thailand’s exclusive economic zone, 200 nautical miles off the mainland.

The couple faces charges of threatening the Kingdom’s sovereignty, and could face the death penalty or life in prison.

Elwartowski’s visa has been revoked and he has been put on a blacklist by Immigration police. He and Supranee are still on the run.

Naval and Phuket Maritime personnel boarded the structure a week ago and said it violated criminal law and posed a navigational hazard.