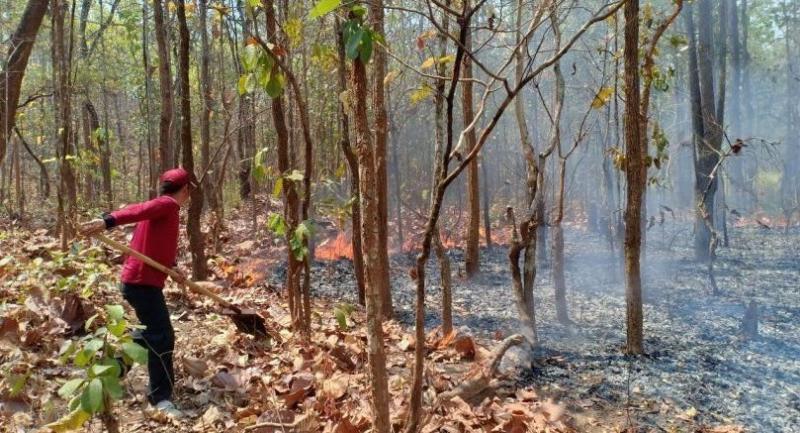 A serious study is required as this year’s air pollution in the North proves that Thailand lacks proactive measures to deal with “special conditions”, officials fighting forest fires in the past month say.

Apart from the El Nino phenomenon, which has dried up water sources and moisture, the accumulation of natural fuel in the forests and lack of cooperation from communities near forests has contributed to the crisis this year, said Thalerngsak Petchsuwan, deputy director general of the Pollution Control Department. He was speaking at a weekly press briefing at the Natural Resources and Environment Ministry.

“There is something unusual about this year, as the number of hotspots skyrocketed from the year before, when communities living near forests were cooperating. A lesson should be learned from this to guide our actions in the future,” he said.

This lack of cooperation is believed to be one of the prime reasons for wildfires this year, as relations between communities and forest officials turned sour after the junta ordered strong action against forest encroachers.

Though concerned agencies have not confirmed this as being the reason for forest fires, they agree that lessons must be learned from the ongoing crisis.

Based on records, wildfires had dropped over the past four or five years, but have climbed again this year, up to more than 6,900 spots, with as many as 3,100 occurring in protected forests.

A source from the National Parks Department said fires are generally started on the edge of deciduous forests overlapping community forests that people utilise to make a living.

Using fire to seek forest resources and to clear farmland are being widely blamed for forest fires and heavy haze this year.

Sources say the most worrying trend is that wildfires this year have been started intentionally deep in the forest, which are more difficult to douse and cause more damage to forest resources and wildlife.

Sompoch Maneerat, the department’s spokesperson and former chief of Huai Kha Khaeng Wildlife Sanctuary, which is well protected from forest fires and other threats, said his department will assess the damage done this year and investigate the cause of wildfires in protected areas.