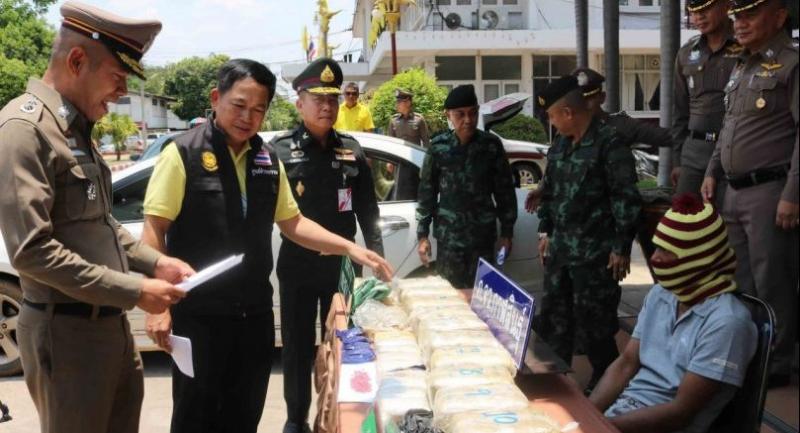 A joint operation between the Interior Ministry, police and Army has led to the arrest of an alleged courier who has been distributing drugs in several northeastern provinces, officials said on Tuesday.

The arrest of Wut Parnsimai, 37, was announced at a press conference at the head office of Kalasin police.

Thinnarat said officials of the joint operation to crack down on drug trafficking had received information that teenagers were seen abusing drugs at a house in Moo 2 village in Tambon Huay Lua, in Kalasin’s Somdet district.

Officials rushed to the scene and found two girls, who tested positive for drug abuse.

The teens said they had bought the drugs from Wut, who lives with his wife in Ban Nong Waeng village in Tambon Nong Waeng, also in Somdet district.

Police immediately went to the village and arrested Wut at a hut in a rice field about one kilometre away.

Police then took him to his house, where a large haul of 131,000 meth pills was found.

Wut reportedly told police that he had been hired by a Roi Et man he knew only as “Tom” to pick up drugs from him and deliver them in various northeastern provinces by leaving them on specified roadsides.

He said he had recently picked up two bags of meth pills from his supplier, delivering one bag in Maha Sarakham’s Chiang Yuen district and keeping the other for sale in Somdet, the press conference was told.