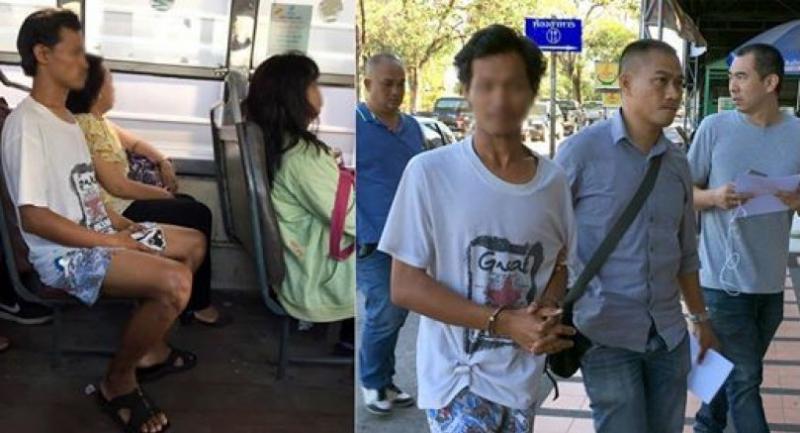 The photo on the left is taken from JibJib Pongpakkittikul's Facebook and shows Boy, the suspect, sitting with the phone on his hand. The right photo shows police escorting Boy after he was arrested.

A passenger on a public bus noticed that the man sitting in front of him kept refusing to receive scores of calls to the expensive mobile phone he was holding in his hands.

The quick-thinking passenger leaned over, peeked at the incoming calls and found that they were all from the same number.

He telephoned the number on his own phone and talked with the caller, who claimed that he was the owner of that mobile phone and that it had been stolen from him along with his motorcycle.

The Good Samaritan then revealed what he had found to the conductor – she approached the man, who confessed to stealing the phone and when the bus stopped outside at a police station near Soi Sukhumvit 62, the driver and the conductor took him out and handed him over to police.

The incident happened on bus no 180 while it was travelling on an expressway, so it was not possible for the thief, later named by police as Boy Deemalert, to escape by jumping out of the bus.

The whole story became known after another passenger, JibJib Pongpakkittikul, mentioned the incident on her Facebook page. She said she had also become suspicious after seeing the man repeatedly reject the calls and appear not to know security code to unlock the phone.

Initially, scores of FB users questioned JibJib, claiming she must have made it up and saying it sounded more like the plot from a film than a real story.

However her story was confirmed when the bus conductor was interviewed by a news TV programme.

The conductor, Naruedee U-sadee, said Boy got into the bus at a bus station near Sai Nam Pueng School and while the bus was on the expressway, a man approached her, saying that the man stole the phone.

She approached the man after noticing that he was not armed and asked whether he had indeed stolen it.

“I tried to convince him to confess by not using an aggressive approach out of fear that he would harm me and other passengers,” she said. “Luckily, he confessed. The bus driver then stopped the bus at the police station and he was handed over to police.”

Initial reports suggested Boy had also stolen a motorcycle from the same victim but that he was stopped at a road checkpoint for not wearing a helmet and police had seized the bike, forcing him to take the bus instead.

He was later sent to the police station in Phra Pradang, where the theft of the motorcycle and the mobile phone had allegedly taken place.