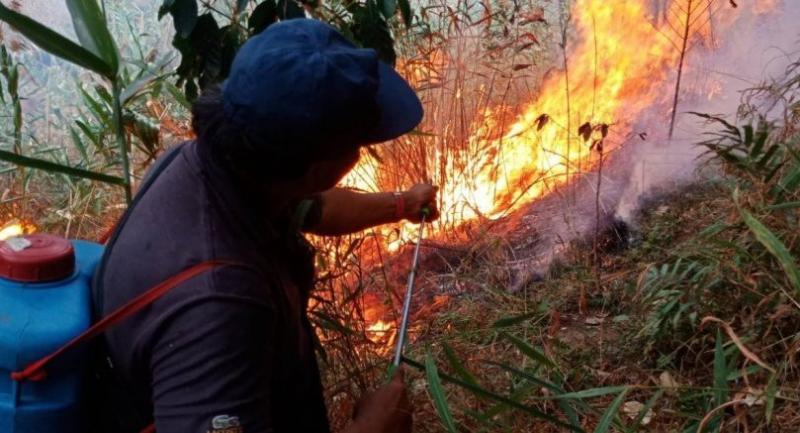 Chiang Mai province continued to suffer from 154 hot spots – out of 534 hot spots cited in nine northern provinces on Thursday.

To replace the ban on outdoor burning that ended on April 30, Chiang Mai province now allows farm-clearing fires, although fire-lighting by poachers is illegal.

Farm-clearing fires are to adhere to zoning and time-arranged regulations and the kamnan and village headman are to be notified first to contain fires, provincial governor Supachai Iamsuwan said.

The Chiang Mai Air Quality Health Index Center as of 8am showed the hourly result of PM2.5 – airborne particulates 2.5 microns or less in diameter – to be dangerously high in Chiang Mai with Tambon Mae Na Jon in Mae Chaem district being the worst off at 584 micrograms per cubic metre of air while the Air Quality Index was beyond measurement. Meanwhile, the Pollution Control Department (PCD) at 9am, put the 24-hour average of PM2.5 between 20mcg and 168mcg in nine northern provinces. Tambon Wiang in Muang Chiang Rai was worst off at 168 mcg, followed by Tambon Wiang Phang Kham in Chiang Rai's Mae Sai district at 125 mcg, Tambon Ban Dong in Lampang's Mae Mo district at 79 mcg and Tambon Ban Tom in Muang Phayao at 77 mcg.

Chiang Mai Natural Resource and Environment Office director Saratcha Suriyakul Na Ayudhaya on Tuesday had said Chiang Mai suffered a total of 1,517 hot spots from January 1 to April 29, which was a 880-locale increase from the same period last year.

Out of the province's 10 million rai of forestland, a total of 374,313 rai were damaged in fire during January 1-March 16 including 335,432 rai of national conserved forestland.

As there were still some 100,000 rai of farmland in need of agricultural waste clearing by burning in 23 districts (except Doi Tao and Doi Lor districts), the province had asked local administrators to find other solutions than burning and review the figure of areas in need of farm waste burning for submission by next week, he said.

When they get the exact figure of farmland in need of waste burning, the authorities could allow the burning in an appropriate time period with consideration to various factors including wind direction, to minimise haze, according to Saratcha.