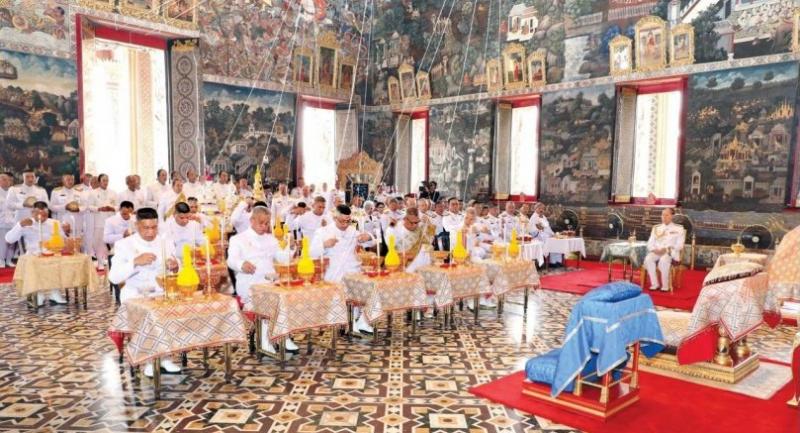 Mom Chao Pusarn Sawasdiwat on April 23 is ceremonially assigned the job of overseeing the inscription of two royal plaques and the engraving of the Royal Seal of State.

Even before the monarch is handed the Royal Regalia, he is to be presented with an anointed plaque carrying his official name and a Royal Seal of State, by which he is bestowed full power as head of state According to Thailand’s centuries-old traditions, a king needs to be crowned to enjoy full kingship.

And the king’s coronation cannot be complete without the Royal Golden Plaque carrying the monarch’s official name and his Royal Seal of State.

People across the nation are keenly following every detail of the coronation, as they rejoice in the fact that their current monarch, His Majesty King Maha Vajiralongkorn (King Rama X), is going to be crowned in a rare and historically significant ceremony.

King Rama X ascended the throne after the passing of his much-revered father HM King Bhumibol Adulyadej (King Rama IX) in October 2016, and will be crowned in a three-day ceremony starting tomorrow.

On the first day of the ceremony, the royal plaque carrying the King’s full name as Thailand’s monarch and the Royal Seal of State will be presented to him first – even before the Royal Regalia, the ancient orders and the weapons of sovereignty.

Though the size of the plaque varies from reign to reign depending on the length of the monarch’s name, traditionally they are 0.1 centimetres thick and rectangular in shape. The full name of the current monarch has already been inscribed on such a plaque.

The inscription was done in a sacred ceremony on April 23 within the main ubosot of the Emerald Buddha Temple, which sits in the compound of the Grand Palace. In the same ceremony, the King’s horoscope was also inscribed on another golden plaque and the Royal Seal of State engraved. Once the inscription and engraving was completed, the chief Brahmin priest anointed the plaques and the seal. The completed plaques with the King’s official name and horoscope, together with the Royal Seal of Approval were then placed on the stone pulpit in front of the Emerald Buddha statue.

Today, the plaques and the seal will be taken to the Baisal Daksin Throne Hall as part of the final preparation for the coronation ceremony.

“…By Siamese royal traditions since ancient times, a king who starts a new reign shall have to attend a coronation ceremony to acquire full kingship. Without the coronation ceremony, even if he moves into the Royal Palace, he still uses his old name…his command shall not be treated as the king’s command. Only after he undergoes the ‘Song Muratha Bhisek’ or Royal Purification ceremony and receives the Royal Plaque of his name and Royal Regalia from the Phra Maha Ratchakhru Brahmin, who performs the Coronation Ceremony, can he sit on the throne with full kingship…,” King Rama VI wrote in the Annals of Royal Coronation.

King Rama VI was a son of King Rama V, the great grandfather of the current monarch – the 10th king in the Chakri Dynasty.

Once the coronation ceremony is complete, King Rama X will affix the Royal Seal of State on key documents during his reign.

The seal symbolises his royal power and reaffirms his status as Thailand’s head of state.