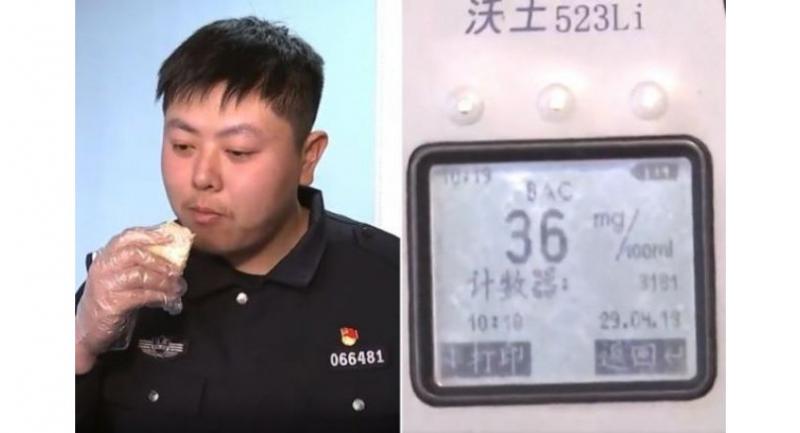 An officer measured his blood alcohol level after eating durian and found the recording was 36mg per 100ml.//Photos : SCREENGRAB FROM N.MIAOPAI.COM.

Beijing : A Chinese man who had an unlikely indulgence on a night out was captured on video desperately trying to prove he was sober, after he was pulled over by the police for suspected drink driving.

The man, whose identity is not known, did not consume any alcohol but, to his surprise, had failed his breathalyser test.

A clip on Chinese news platform Pear Video later revealed that he had eaten too many durians instead.

The man from Rudong country in the eastern province of Jiangsu was shown in the April 17 clip pleading with police officers.

According to Pear Video, the man went through a follow-up blood test, which proved that he had no alcohol in his system. Curious, the police department later carried out an experiment of their own.

An officer measured his blood alcohol level after eating the fruit and found the recording was 36mg per 100ml.

The legal limit for blood alcohol concentration in China is 0.02 per cent or about 20mg per 100ml, according to the BBC.

A couple of minutes later, the officer repeated the breathalyser test and a negative reading was shown.

In the Pear Video clip, viewers were also warned against other kinds of products that could result in a positive breathalyser result, such as mouthwash and lychee.

While some Chinese social media users were amused that durians could have such an effect, others wondered if the police had wasted their resources on such a minor incident.

User LionHeartFY said: "The poor man did not do anything, but had to be injected by a needle and have a vial of his blood taken. I think they owe him a box of durians."