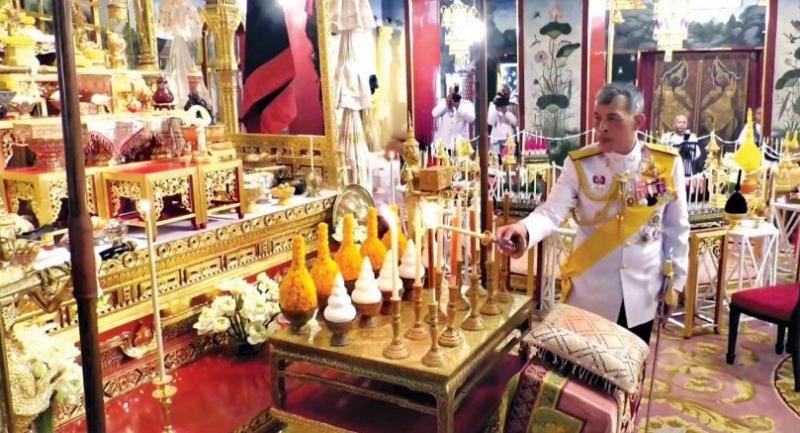 His Majesty King Maha Vajiralongkorn yesterday lights candles at the Baisal Daksin Throne Hall to consecrate the ceremonial objects which will be used in the coronation ceremony. Members of the Royal Family, government and clergy have unanimously decided to hold the Royal Coronation Ceremony for the 10th king of the Chakri Dynasty, it was announced at 5pm on Friday, setting the stage for the three-day coronation ceremony.

Phra Phrom Muni, secretary to His Holiness Ariyavongsagatanana, the Supreme Patriarch, made the announcement on Friday after the Supreme Patriarch lit the Victory Candle with His Majesty King Maha Vajiralongkorn standing by the latter’s side in the Amarindra Vinijaya Throne Hall.

Once the candle was lit, monks began chanting prayers in the Amarindra Vinijaya and Baisal Daksin throne halls and the Chakrapat Biman Royal Residence – collectively known as the Phra Maha Monthira in the inner sanctum of the glittering Grand Palace. His Majesty arrived at the Grand Palace at 4pm on Friday with Queen Suthida and his three children – Their Royal Highnesses Princess Bajrakiti-yabha, Princess Sirivannavari Narirat-ana and Prince Dipangkorn Rasmijoti.

Their motorcade was greeted by citizens outside the Emerald Buddha Temple ubosot, wearing yellow clothing and chanting “Long live the royals”.

They then moved on to the Amarindra Vinijaya Throne Hall, where the King paid respects to the Triple Gems and the Buddha statues of his ancestors. Waiting in the adjoining Baisal Daksin Throne Hall were Princess Ubolratana and Their Royal Highnesses Princesses Maha Chakri Sirindhorn and Chulabhorn along with many other members of the Royal Family. The King greeted his sisters – the eldest one, Ubolratana, with a hug – before entering an adjoining shrine to pay respects to the cremated remains of his ancestors, a tradition begun by King Rama VII. At 10am, Royal Golden Plaques with the King’s official name and horoscope and the Royal Seal of State were carried in procession from the Emerald Buddha Temple to the Baisal Daksin Throne Hall, a distance of 220 metres. The three items, which all play significant roles in the coronation ceremony, were made in a sacred ritual at the temple on April 23. The procession, amid the sound of gold and silver drums, horns and conch shells, included 113 individuals from five government agencies. At the throne hall, Lord Chamberlain ACM Satitpong Sukvimol carried the three items on a golden tray to a pedestal inside.

The ceremonies, in line with ancient traditions, were televised for everyone to witness.