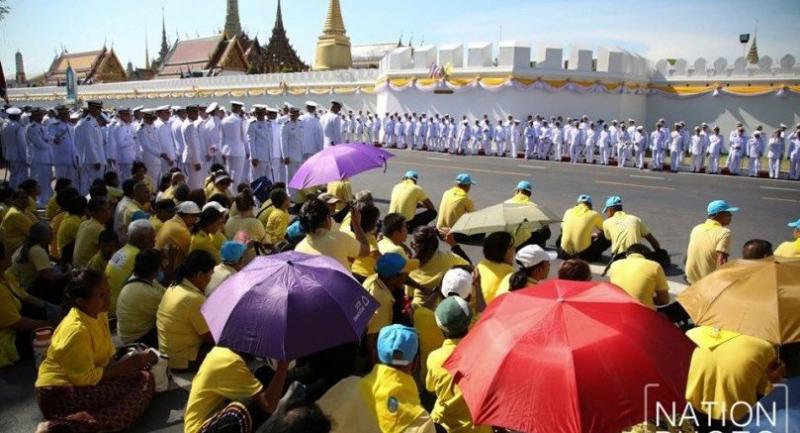 The Grand Palace and Rajdamnoen Avenue, landmarks of “Old Bangkok”, shone brilliantly with warm yellow lights on Friday night, a night before the Royal Coronation of HM King Maha Vajiralongkorn.

The Democracy Monument, located in the centre of the historic avenue, was lit brightly, sparking a rare atmosphere of optimism and unity. Photographers and visitors from around the country encircled the monument. Many arrived early on Friday night to witness Thailand’s first Royal Coronation in 69 years, with the previous ceremony dating back to 1950 when HM King Bhumibol Adulyadej was coronated.

King Bhumibol’s legacy continues to shape the mood of Thais around the country, with people viewing him as a father figure. Citizens gathered in the area to witness this historic event expressed a collective sense of pride and joy to celebrate the crowning of their new king, embracing their new father with open arms.

On Saturday morning, only a few hours before the ceremony commences, the space surrounding the avenue was transformed. From large roads leading towards the Grand Palace to small quiet alleys, crowds gathered, all wearing yellow in respect for the monarchy.

The sleazy Khaosan Road, normally filled with tourists, nightclubs and vendors selling exotic deep fried tarantulas, was transformed into a sober area as police officials set up fences in the street for crowds to gather and wait for the ceremony.

With the ceremony underway, the soundscape of Old Bangkok shifted, ringing with sounds of excitement from people who had travelled across the country to witness the ceremony for the first time in their lives. Loudspeakers echoed a narration of the traditions and processes of the coronation ceremony at key locations surrounding the Grand Palace.

Standing patiently on a pavement on Rajdamnoen Avenue was Ning, 45, from Ang Thong province. Ning said she was pleased to have the opportunity to witness the ceremony. This is a “once in a lifetime” opportunity, she said. Ning hopes the ceremony will help unify Thais all over the country and believes Thai people have been eager to celebrate the crowning of their new King.

Orn, a 22-year-old university student from Surin province, stood in front of the Grand Palace as the ceremony took place. She said the atmosphere surrounding the Grand Palace has been vibrant since early morning. Thai people are excited about the ceremony, as it is a historic event that many people like myself have never witnessed. The heat of Bangkok has not scorched the enthusiasm of the Thai people in any way. Despite the hot sun, the atmosphere is fresh with the energy and excitement of the people, she said.

Nok, 38, a teacher in Bangkok, feels delighted to have the opportunity to witness the ceremony. “I have always been curious about the grand coronation ceremony which is steeped in Thailand’s tradition. In general, Thais are interested to learn more about this ceremony, forming a sense of unity for all of us,” Nok said.