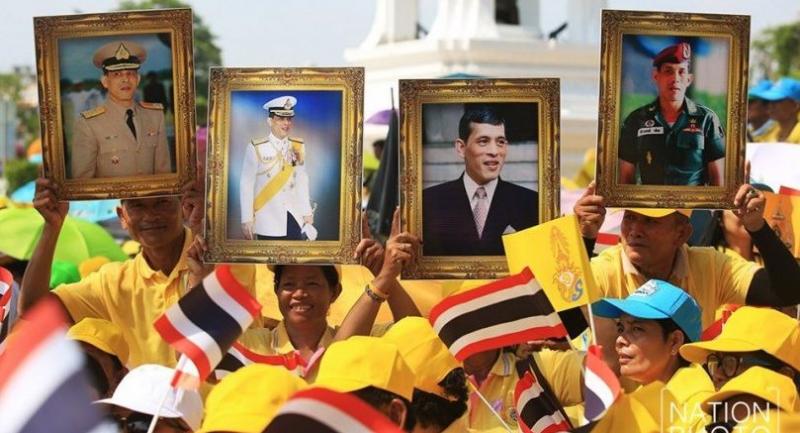 THAIS ATTENDING the Royal Coronation ceremony of His Majesty King Maha Vajiralongkorn expressed optimism about the Kingdom’s future during the new monarch’s reign.

Despite the sizzling hot temperature in Bangkok that hit 39 degrees Celsius yesterday, tens of thousands of loyal subjects from across the country, wearing yellow shirts, lined up along the royal procession route and waited patiently for several hours under the blazing sun in the hope of catching a glimpse of their newly crowned King.

Some expressed concern about the political conflict after the March 24 general election, but had faith in the monarchy and believed that under the King’s rule, the country and its people will experience peace and prosperity, as they did during the long reign of the previous monarch – the late HM King Bhumibol Adulyadej. Pornpimol Kaewklang, a 28-year-old citizen of Kalasin province and an officer at the Natural Resources and Environment Ministry, was one of the loyal subjects who travelled a long way to witness the Royal Coronation ceremony in Bangkok.

Pornpimol said she was delighted to get this once-in-a-lifetime opportunity to take part in the coronation ceremony of the new King, so she wanted to get as close as possible on the royal procession route to see the King with her own eyes.

“It is my highest honour to be in such proximity of the King. I am very eager to be in the front and show my loyalty to our new monarch,” she said.

“I am sure that His Majesty will reign as justly as the late King Bhumibol and our country will continue to prosper under his reign.”

Prachon Ronhongsa, a 59-year-old private business owner from Chainat province, also expressed delight at being a witness to this major event in Thai history. He said he was confident of the country’s bright future under HM King Maha Vajiralongkorn, but added that he was a little worried about the political conflict ahead.

“I am certain that his reign will be a peaceful one and we will live happily under his glorious reign,” Prachon said.

“However, as the King holds no direct political power in the governing of the country, I am still a bit concerned about the re-emergence of violent political conflict and deep divisions within society, as the government still cannot resolve the deadlock after the election.” Though the attendees rejoiced in the coronation ceremony and were thrilled about the official ascension to the throne of HM the King, many complained about poor crowd management at the event.

The village headman from Singburi province’s Bang Rachan district, Winai Songsit, said they had to wait for more than three hours in the queue just to get into the event ground.

“Most people from my village attending the ceremony, are elders. Though they are keen to see the coronation, they struggled due to the hot weather and the crowded, suffocating environment. Many of them fainted and one had to be hospitalised,” Winai said.