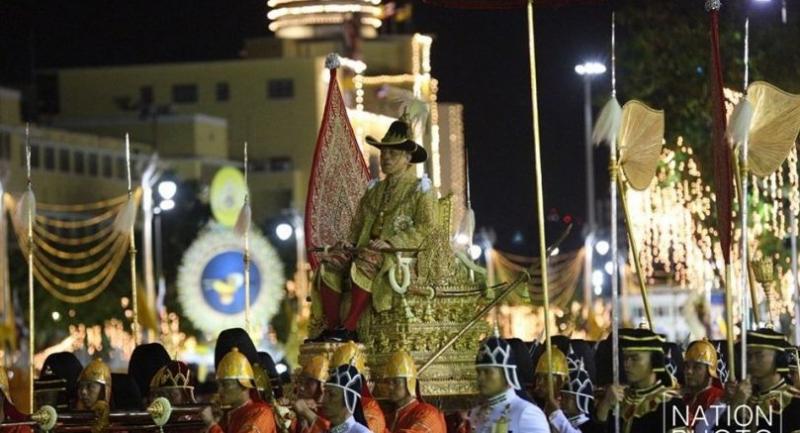 His Majesty King Maha Vajiralongkorn’s royal procession resumed at around 7pm on Sunday after its first stop at Wat Bovoranives.

The procession went along Phra Sumen Road and returned to Rajdamnoen Road past the Rattanakosin Exhibition Hall and the Democracy Monument, which glittered in gold reflecting the footlights. After dark, the procession went past buildings and trees decorated with yellow lights and thousands of flag-waving people clad in yellow.

Buildings along the route glowed in the dark with thousands of lights. Most parts of Rajdamnoen and other thoroughfares were brightly illuminated.

The procession continued along Atsadang Road and Bamrung Mueang Road before arriving at Wat Rajabopidh near the Giant Swing, where His Majesty again paid homage. The next leg went along Fueang Nakhon Road and Charoen Krung Road to Wat Phra Chetuphon (Wat Pho), where again the central Buddha image was honoured by the King.

The procession took Thai Wang Road to return the King to the Grand Palace, re-entering through the Vises Jayasri Gate.