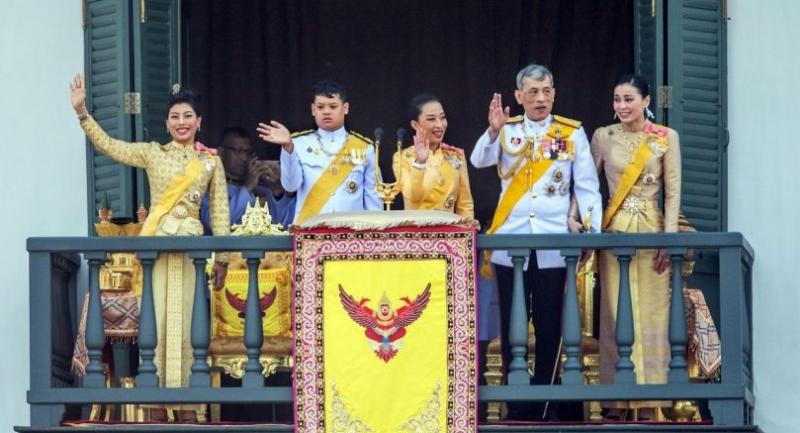 His Majesty King Maha Vajiralongkorn grants an historic public audience from the main balcony of the Suddhaisavarya Prasad Hall of the Grand Palace in Bangkok yesterday. The King His Majesty King Maha Vajiralongkorn granted a historic public audience from the main balcony of the Suddhaisavarya Prasad Hall of the Grand Palace in Bangkok yesterday.

A sea of yellow-clad people of all ages and from across the land had gathered in front of the balcony, waving yellow flags, chanting loudly, “Long Live the Royals”. Prime Minister General Prayut Chan-o-cha and his Cabinet members, together with their spouses, also gathered in front of the hall.

Speaking on behalf of the Thai people, Prayut expressed delight on the coronation of the King and extended best wishes from all.

The military then fired gun salutes in the King’s honour as the Royal Anthem played. However, the loud chant of “Long Live the Royals” that continued from the subjects, rose above the gunshots and the music from the loudspeakers. Replying to the prime minister’s address, His Majesty said that he and the Queen were pleased to have received the people’s goodwill and to have seen them turn out in full force to express their best wishes on the occasion of his coronation.

“I am extremely gratified. May your unity in expressing to me your goodwill augur that everyone, and all sides, shall take action for the further prosperity of our nation,” the King said. He then thanked his well-wishers and offered them his blessings. It was the first grand public audience by the monarch since he was crowned and enthroned during three days of sacred rituals that began on May 4. It was from this same balcony that his parents, HM King Bhumibol Adulyadej and HM Queen Sirikit, had waved to their well-wishers back in 1950 following his coronation. The royal couple’s only son, HM King Maha Vajiralongkorn, ascended the throne in late 2016. But the coronation was a traditional affirmation of his role as the nation’s monarch, and concluded impressively with yesterday’s balcony appearance by the Royal Family.

The monarch appeared on the balcony on the second floor of the Suddhaisavarya Prasad Hall at about 5pm yesterday with HM Queen Suthida at his side. Standing behind them were his children, their Royal Highnesses Princess Bajrakitiyabha, Princess Sirivannavari Nariratana and Prince Dipangkorn Rasmijoti. Following his speech, the King waved to his people with a smiling Queen beside him. He then gestured to his children to come out on the balcony. The prince and the princesses were all smiles, and waved energetically at the gathered well-wishers. The King and the Queen could be seen holding hands, and then the Queen also waved to the gathering. Hours before the scheduled appearance of their King, thousands of people had thronged onto Sanamchai Road where the Suddhaisavarya Prasad Hall is located, in anticipation of the precious moments to come.

“I arrived at 7am and fortunately I got a spot in the front row of the Throne Hall,” said Lamai Boriboon. The 58-year-old woman had travelled all the way from Chainat province, and was unfazed at having to sit under the scorching sun and sweltering heat for hours, even as the mercury rose to nearly 40 degrees Celsius.

“I really wanted to see the historic moment with my own eyes,” Lamai declared.

“I am grateful for the King’s blessings … I trust that everyone will now want to follow his guidance for a prosperous and peaceful Thailand,” Korn said.

Yoi Pakahan, 85, came for the public audience granted by the King because she felt the monarch was truly important for the nation.

Her daughter, Areya, added: “We feel deeply grateful to all Thai kings. Life had been harsh for older generations, but now Thai people can live happily because of the sacrifices of all the great kings of Thailand.” Pojjanart Chansawang brought along her four-year-old son to the historic first public audience by the new King.

“It is hot. But this is a once-in-a-lifetime experience. My son has long seen the King on TV and really hopes to see him in person,” the mother said. Her son wanted to be a soldier when he grew up, she added. The grand public audience lasted about 10 minutes, as the royals had to leave for the Chakri Maha Prasad Throne Hall to meet foreign envoys.

There, Singapore Ambassador Chua Siew San, the dean of diplomatic corps in Thailand, presented best wishes to the King on the occasion of his coronation.

The King replied that he, the government and the Thai people, would support good relations with all countries.