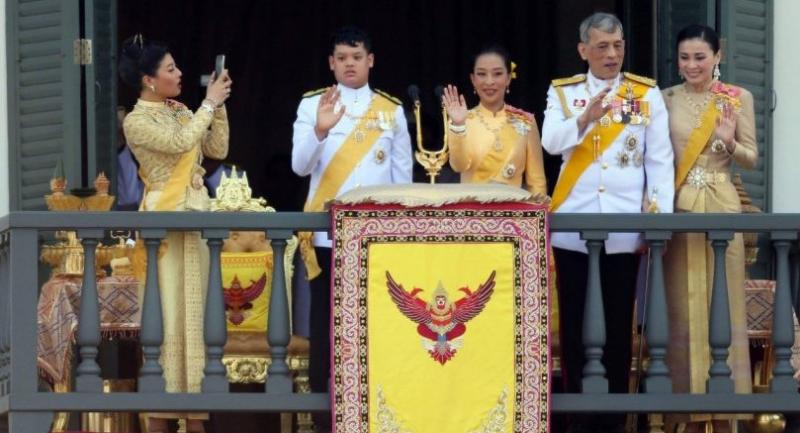 Netizens nationwide have expressed their gratitude to Her Royal Highness Princess Sirivannavari Nariratana for giving them rare glimpses of behind-the-scenes goings on during the Royal Coronation ceremony.

During the three days of the event, the Princess was often seen capturing intimate moments on her mobile phone and waving to the crowds. Princess Sirivannavari, the second daughter of His Majesty King Maha Vajiralongkorn, graciously took time out to take shots of herself and members of the Royal Family, which garnered hundreds of thousands of likes and shares on her official Facebook page.

On Monday evening, after His Majesty the King delivered a speech in his first public audience from the balcony of the Suddhaisavarya Prasad Hall in the Grand Palace, the Princess began taking photographs on her phone from the balcony, while her siblings were waving to the crowds. Though the scene was broadcast on television, many netizens expected to see a panoramic view from the balcony’s vantage point. And the Princess did not disappoint.

A while later, a clip was posted on her official Facebook page showing a bird’s-eye view of thousands of yellow-clad people gathered on the grounds in front of the balcony. She also captured two shots of the King and Queen from behind, while they were on the balcony.

As usual, her captures received many comments of admiration and praise, winning more than 135,000 “like”, “love” and “wow” emoticons in just three hours.

“I thank the Princess wholeheartedly for bringing us close to the King and members of the Royal Family via social media. Your Royal Highness is so cute. I could not stop smiling as I watched the video,” read a comment from Facebook user Siriporn Nui Mahitti.

“I never thought I would be able to see a view from the balcony. I’m so lucky. Long live the King and the Royal Family,” Onjira Sukjai commented.

The Princess also joined her siblings and the King and Queen on the balcony to wave at the crowds with a big smile, and was the last person to leave the balcony. “The Princess waved very gracefully and she’s so adorable. Long live the King and the Royal Family,” Tai Ornanong wrote.

“The Princess is very cheerful. She made all Thais smile. She is so friendly,” wrote Yaya Pakanitischon.

The Princess' official Facebook page also posted spontaneous and touching photos of members of the Royal Family during the ceremony on Sunday, when the King bestowed new titles on members of his family and during his procession.

One of the photos was a selfie the Princess took with her aunt, Her Royal Highness Princess Maha Chakri Sirindhorn – both of them sporting big smiles.

Another photo showed the Princess posing with her brother His Royal Highness Prince Dipangkorn Rasmijoti, capturing a tender moment between the brother and sister.

Many Facebook users said this wonderful image reflected her beautiful character. This post too was shared more than 125,000 times and earned over 374,000 responses in 23 hours.