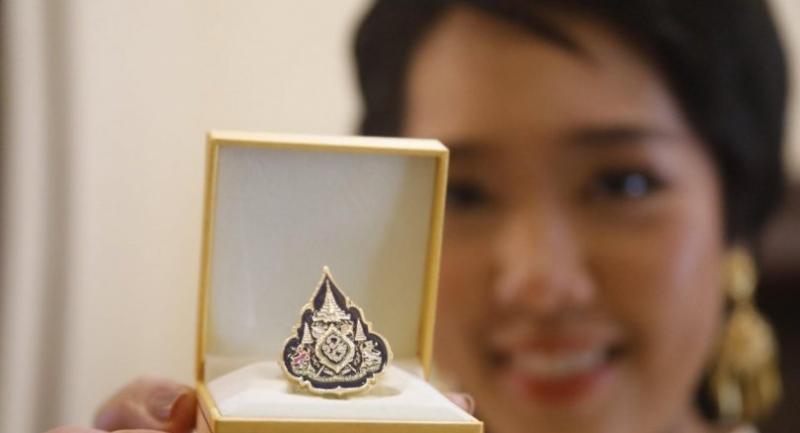 The grand Coronation of HM King Maha Vajiralongkorn (King Rama X), which ran for three days until yesterday, was a historic occasion that brought forth a variety of collectible memorabilia. Indeed, citizens’ love for the monarchy saw them searching out souvenirs even before the three days of ceremonies began. Made of tin and copper, this pin is 3.8 centimetres long, with a blue and golden rim background. King Rama X’s initials appear in white enamel. On the left is a mauve-coloured mythical half-lion, half-elephant carrying a seven-tiered umbrella while on the right sits a white lion carrying a similar umbrella. The message “Royal Coronation Ceremony of BE2562” is inscribed in gold on green enamel. A similar message appears on the back of the pin. Its lock is made of gold-coated brass. This pin is sold in a box made of 120-gram gold-leaf art paper with a plastic cover. The ivory-coloured box is 6.4cm x 6.8 x 2.8 with a lid carrying the golden emblem of the Royal Coronation ceremony. This round pin features not just a Coronation emblem but also the message “Grand Public Audience from a Balcony on May 6, 2019”. These pins have been given to people who gathered for Monday’s audience granted by the newly crowned monarch. Featuring the coronation emblem, these white and yellow flasks were given to people who visited the Grand Palace during the three-day ceremonies to get a glimpse of the newly crowned king. Yellow shirts featuring the emblem of the Royal Coronation ceremony

Manufacturers of these shirts have received royal permission to use the emblem. The shirts are polo-style and available in various sizes. On this special occasion, the Treasury Department has released a series of special mementoes:

99 per cent gold and lacquered coins, 26mm in diameter and weighing 20 grams

92.5 per cent silver and lacquered coins, 35mm in diameter and weighing 22g

Coins made of a copper-nickel mixture, 32mm in diameter and weighing 15g Made by the Thai brand Wise, these commemorative timepieces come with a leather strap and offer dials in many different colours. A stamp for the occasion

The coronation stamp issued by Thailand Post features a picture of King Rama X in full Royal Thai Army uniform with his initials and the Grand Palace in the background. Included is the message “Coronation 2019”. The stamp marking the coronation of King Rama X is in fact the 11th stamp released by Thailand Post featuring the image of HM the King.

The first came out in 1972 to mark the then-Prince’s 20th birthday. The same year, another stamp was released to mark his investiture as Crown Prince.

A third stamp of the Crown Prince was released in 1999, followed by a fourth to mark his 48th birthday. In 2002 and 2012, Thailand Post issued stamps to mark the milestones of the |then-Prince’s 50th and 60th birthdays.

In 2016, the country celebrated his 64th birthday with a stamp displaying a picture of “Bike for Mom” and “Bike for Dad” events that the Crown Prince organised for his parents, HM King Bhumibol Adulyadej and HM Queen Sirikit. After he ascended the throne, an eighth stamp was issued to marked his 65th birthday in 2017. Last year, Thailand Post released a commemorative stamp marking the 66th birthday of HM King Maha Vajiralongkorn.

It then released its 10th stamp in his honour, featuring his portrait.