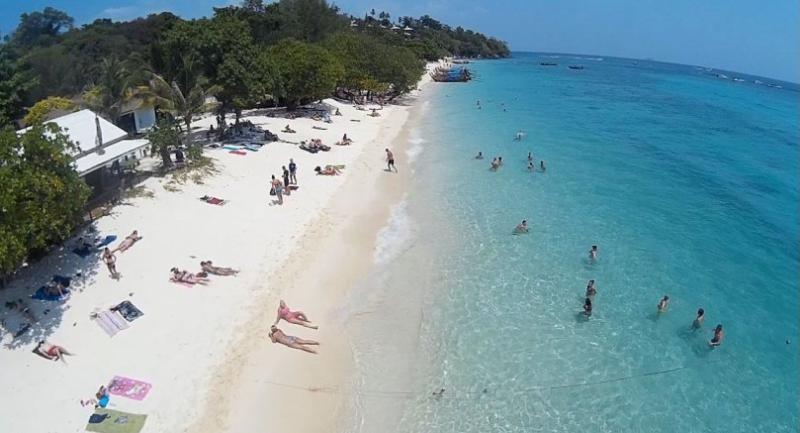 Maya Bay, which has been closed to the public since last year to allow its beach and coral to recover, will remain shut to visitors for at least another two years as its ecology needs more time to heal, a renowned marine specialist said yesterday. Tanya Netithammakul, director-general of the Department of National Parks, Wildlife and Plant Conservation (DNP), will have the final say on whether to reopen the site for tourism and on which date, said assistant dean of Kasetsart University’s Faculty of Fisheries Thon Thamrongnawasawat, in his capacity as a member of the DNP’s marine park management advisory board.

After the reopening, a series of measures will be imposed on Maya Bay and adjacent Loh Sama Bay, located within Hat Noppharat Thara–Mu Ko Phi Phi National Park, so as to limit the number of tourists and bar tour boats from entering through the front bay. Such measures would be essential to protect corals and reef sharks in the area, Thon said.

The DNP is in the process of implementing measures to minimise the environmental impact as well as build facilities such as nature study trails, piers and housing for officials. A future e-ticket system and a vessel monitoring system would also improve tourist management, Thon said. These facilities and systems would be tested first to assess their impact on the environment before authorities decided whether and when to reopen Maya Bay for tourism, he added.

Songtham Suksawang, director of the DNP’s National Park Office, said that after Maya Bay was reopened, the park authority would conduct follow-up reports on environmental impacts every three months in order to determine the appropriate number of tourists per session and per day in order to conserve the natural resources.

Maya Bay, with its white-powder sands and beautiful coral reef, is located in the Phi Phi islands between Krabi and Phuket. It was made famous by the 2000 Hollywood film “The Beach” starring Leonardo Di Caprio, but was badly battered by the year-round tourist traffic. At its peak, the bay received as many as 5,000 visitors a day.

With its ecology descending into a critical condition, the authority last June announced the closure of the bay to tourists. Initially limited to six months, the ban was extended indefinitely after early indications showed the environment |was recovering slower than expected.