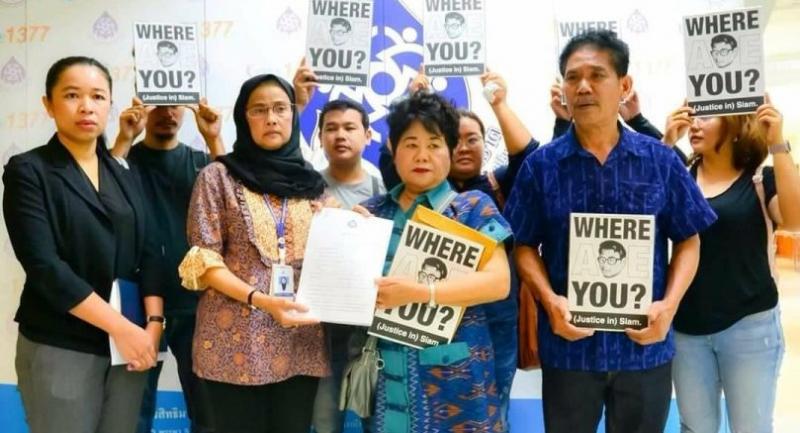 The families and friends of three missing Thai political refugees on Monday submitted letters to the National Human Rights Commission (NHRC), the Vietnam Embassy and the European Union Delegation in Bangkok after the Thai authorities denied having any knowledge of their whereabouts.

The group, led by Siam Theerawut’s family, asked the three bodies to help follow up the situation, since there had been no updates from the Thai authorities despite the fact that it is believed that lese-majeste suspects Siam, Cheep Chivasut and Kritsana Thupthai had been deported from Vietnam to Thailand last Wednesday.

At the NHRC’s head office, the letter was received by human-rights commissioner Angkhana Neelapaijit.

The group asked the NHRC to help find out whether the trio had indeed been deported from Vietnam and where they were being detained, as well as ensure that their human rights were respected.

Angkhana told the family that if it was within the NHRC’s authority, her agency would summon the Foreign Ministry and the Office of the Attorney General to make inquiries.

The family also submitted a letter to the Vietnam Embassy, inquiring whether the refugees remained in the Vietnamese authorities’ custody or had been deported and, if so, how and when.

An official at the embassy said only that it would contact the family if there were any updates.

Thai Lawyers for Human Rights, which facilitated submission of the letters, said the letter submission on Monday had been followed and interfered with by Thai Special Branch police the whole time.

As lese-majeste suspects, Siam, Cheep and Kritsana fled the country after the 2014 coup, when crackdowns on anti-monarchist elements were prevalent.

On Tuesday, the group will also submit a complaint with the Office of the United Nations High Commissioner for Human Rights in Bangkok.