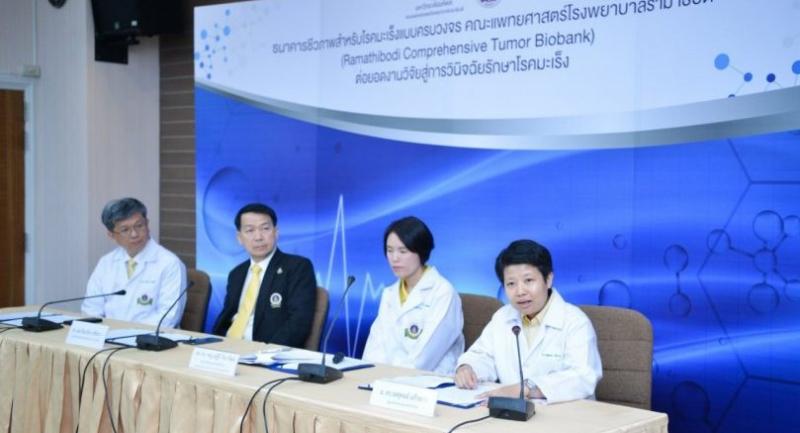 THE RAMATHIBODI Comprehen-sive Tumour Biobank is making good progress in its efforts to support research that will deliver better diagnoses and treatment of cancer.

Samples of tumour tissue, blood components and body fluids are being used by clinical professors, medical lecturers, scientists and researchers for intensive study, which is showing satisfactory progress for translational medicine, biomarkers and a successful development of 3D cancer organoids for retinoblastoma (a rare form of cancer in the retina).

Asst Professor Dr Natini Jinawath, who heads the Ramathibodi Comprehensive Tumour Biobank, revealed earlier this week that research on samples from her biobank had successfully identified biomarkers that could efficiently determine the risk of cancer in another part of the body among patients battling with head and throat cancer.

“Findings have already been published in a well-known international academic journal,” she said proudly, adding that this was the first time that these biomarkers had been identified for cancer detection.

Natini said when cancer in a second position is detected at an early stage, there is a higher chance |for patients to survive and recover fully.

Rossukon Kaewkhaw, a PhD holder and a translational-medicine lecturer at Mahidol University’s Faculty of Medicine Ramathibodi Hospital, said samples from the biobank also paved the way for the development of 3D-cancer organoid for in-depth studies on retinoblastoma.

“This means after doctors test the reaction of drugs on these organoids, they will know what is best for their patients,” she added.

Natini added that the Ramathibodi Hospital Cancer Registry and her biobank shared data.

“Doctors from different medical departments have helped with the collection of samples,” she revealed, adding that her biobank had developed its own data-management software for maximum efficiency.

Professor Dr Piyamitr Sritara, dean of Mahidol University’s Faculty of Medicine Ramathibodi Hospital, said he was confident that the Ramathibodi Comprehensive Tumour Biobank would be useful for the development of new diagnoses and treatment methods for cancer patients.

According to Natini, her biobank has signed an cooperation agreement with the cancer biobank of South Korea-based Yonsei University.