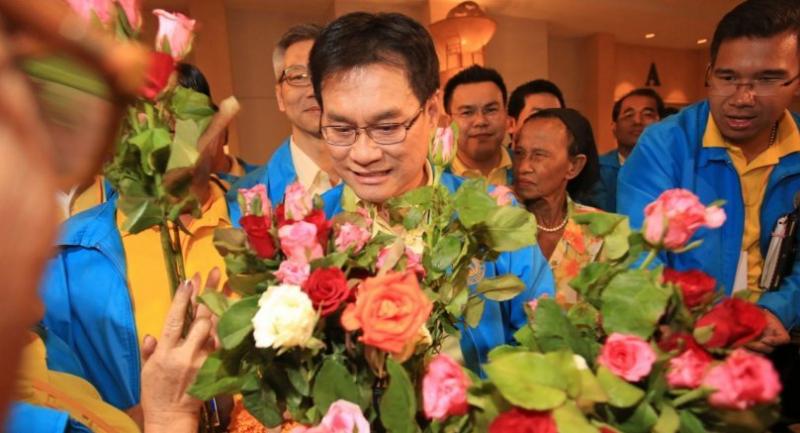 New leader will have to deal with hot potato of whether to join the projunta camp or stay in opposition; Pheu Thai reaches out to him

LONG-TIME Democrat Party deputy leader Jurin Laksanawisit was yesterday elected to lead the country’s oldest party amid political uncertainty both inside the party and in the post-election Parliament.

The 63-year-old takes the reins as the divided party heads into unknown and potentially dangerous territory.

The Democrat slid to fourth place in the recent election, winning only 52 seats in the House of Representatives, a result that puts the once-mighty party in the same league as the medium-sized Bhumjaithai party. The Democrats have, for nearly two decades, been one of the two largest parties in Parliament, alongside arch-rival Pheu Thai Party. The previous Democrat leader, Abhisit Vejjajiva, stepped down less than two months ago following an election result that saw the party toppled in its Bangkok base.

Meanwhile, ideological divisions inside the party have emerged as a major point of concern. The party is reportedly divided into two camps with divergent views on whether to join the pro-junta bloc as part of a coalition, or to remain in opposition to maintain its traditional stance as a pro-democracy party.

During the past decade of political conflict, the Democrats had been widely criticised for not living up to the party’s name and upholding democracy.

Jurin, who became the eighth leader of the party, winning with more than 50 per cent votes, has the tough task of charting its future political course.

Those who voted for Jurin included members wanting to join the pro-junta Phalang Pracharat bloc while the other group prefers to play an independent opposition role, a source in the party told The Nation. Observers believed it was likely that the party would decide to join the pro-junta bloc. The party is expected to hold a meeting to make the decision next week.

In his vision speech yesterday before the vote, Jurin told members that the party would maintain its ideology of |parliamentary politics under democracy and constitutional monarchy. However, the party administration must be changed, which would involve adopting a modern approach to deal with the current disruption.

“Gone is the age of Superman. What’s here is the Avengers,” Jurin said, referring to the blockbuster superhero films. “All superheroes in the party must work together to be Democrat Avengers.”

Speaking about the party’s dismal performance in the elections, he said: “The leader must think about how to make it 100, 200, or more in future. The answer is that we Democrats have to stay united.”

After Jurin’s election as leader yesterday, Pheu Thai spokesperson Laddawan Wongsriwong urged the party as well as other undecided parties, including Bhumjaithai, to turn against the ruling junta and join Pheu Thai in forming a democratic coalition.

“Pheu Thai is willing to join forces with all neutral parties right now in order to pull the country out of economic recession and political crisis and bring prosperity to the country and the people.”

Laddawan, citing her previous experience of being a Democrat member for over eight years, congratulated the Democrats on their leadership elections and said she had been impressed with Jurin as a high-quality human resource in politics.

Jurin was both gentle and visionary, she said, adding that he was a good coordinator who was perfectly fit to lead the Democrat Party now.

Meanwhile, Pheu Thai veteran politician Chalerm Ubamrung said he believed it was unlikely that the Democrats would join the pro-junta camp under Jurin’s leadership.

“Jurin is a man of principle,” he said. “Of all the four Democrat leader candidates, he is the one with the least likelihood of joining Phalang Pracharat. So, it is highly possible that Democrats will be split into two camps after this.”