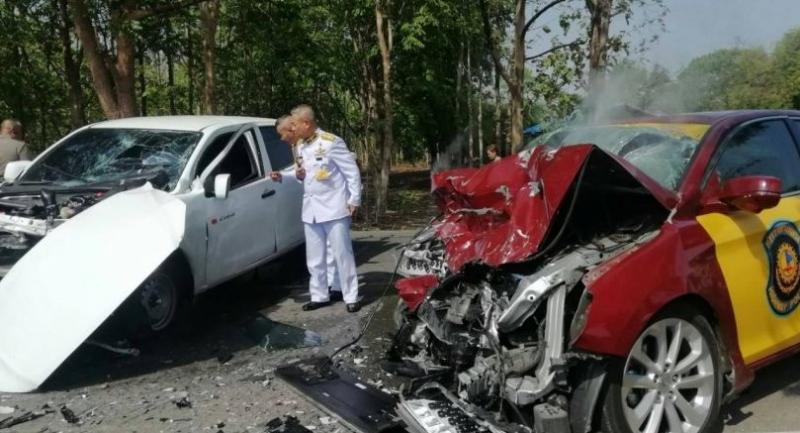 A deputy Phitsanulok police chief was killed when a highway police car leading a royally sponsored merit-making motorcade was hit by a pickup truck in Phitsanulok’s Wang Thong district on Thursday.

A woman passenger in the pickup was also killed and her husband, the driver, was severely injured in the accident at 10am on the Phitsanulok-None Maprang road in Moo 8 village in Tambon Tuenthong. Col Arkom Changplaikaew, deputy Phisanulok chief, was killed in the back seat of the highway police car. Two policemen, the driver and the front passenger, were severely injured.

Arkom was leading a motorcade taking Phitsanulok governor Pipat Ekphaphan, and Pol Lt Gen Sakolkhet Jantra, one of the Grand Chamberlains of the Bureau of the Royal Household, to make merit on behalf of His Majesty the King at Wat Pa Nong Thap Rua temple in Phitsanulok’s None Maprang district.

The grand chamberlain was taking monks' robes and necessities granted by the King to monks, who are older than 90, to Luangpu Lee Thawaro, 94, at the temple.

Police said the pickup cut in front of the royal motorcade.