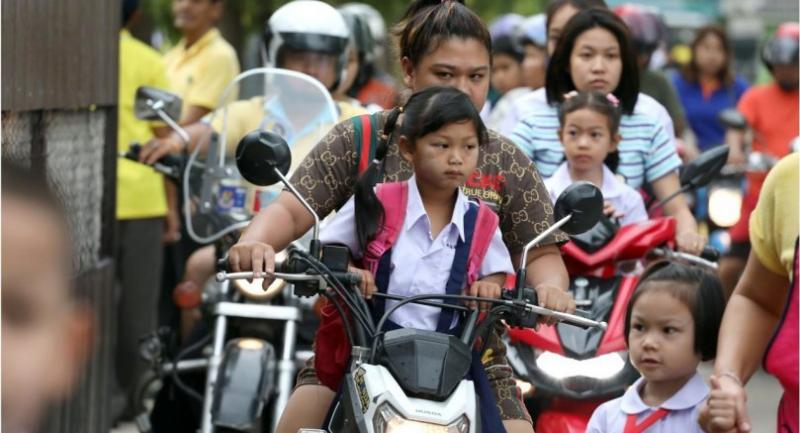 Neither parents nor their children wear helmets as they make their way to Na Luang School in Bangkok’s Thung Khru district yesterday. The school has more than 3,000 students.

Hence, Kongsak Chuenkrailas, who works for the Foundation for Consumers’ public-vehicle safety project, has cautioned parents against buying motorcycles for their teenagers. “We need to educate parents about the risk of motorcycles. Children should be encouraged to use proper school buses instead,” he said.

Thanapong said statistics compiled by the police, the Public Health Ministry and the Road Accident Victims Protection Company show that 17,634 children on average had died annually from road accidents between 2013 and 2017.

“These statistics also reveal that the number of road-accident victims aged between 10 and 19 years has been rising,” he said, adding that most of the accidents usually took place during the summer break as well as long holidays such as the New Year or Songkran break.

A representative of Ramathibodi Hospital’s Child Safety Promotion and Injury Prevention Centre said many children died while riding pillion on motorcycles within their own communities.

Many motorcyclists often ignore the law and choose not to wear a helmet for short rides near their home.

In order to avoid such mishaps, Kongsak said parents should consider putting their children’s names down for safe school buses.

“We have now implemented the school-bus project in 32 provinces,” he noted, adding that many safe school buses now in service have not been registered with the Land Transport Ministry because they did not meet the standards.

“We need to raise parents’ awareness that the wrong choice of school bus is also a threat to their children’s safety,” he said.

Chissanuwat Maneesrikham, who heads a panel on road-|accident prevention in the Central region, said his team has already nudged child-care centres to |push for the use of crash helmets among children by having helmets ready.

“We are now expanding this initiative to primary schools too,” he said.

According to Chissanuwat, crash helmets will be lent to children if their parents forget to bring one along for their kids.