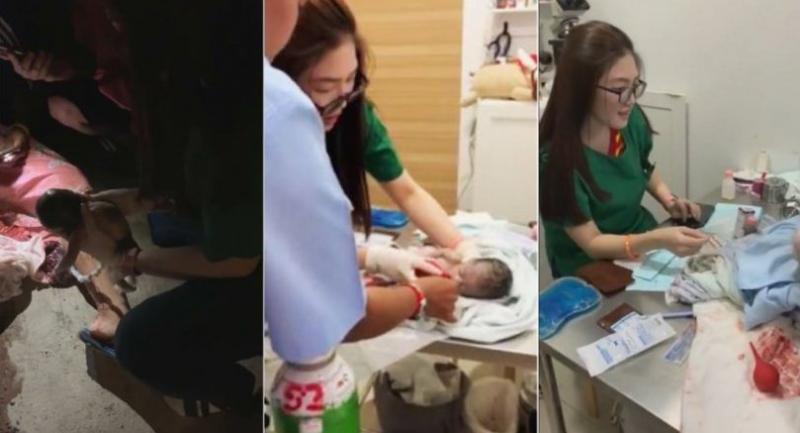 Thai social media users were full of praise on Monday for a Thai veterinarian who saved the life of a baby boy. The infant was born to a foreign migrant worker on Sunday evening in Bangkok's Taling Chan district.

Veterinarian Waree “Mor Mon Pet Angel” Limrungsukho was notified that the woman was giving birth on the roadside not far from her clinic after failing to get a taxi to take her to hospital. Waree rushed to help the woman and her newborn, who was not breathing and turning blue. She carried the baby with the placenta still attached to her clinic and performed cardiopulmonary resuscitation, using a clinical tool to suck out the liquid from the baby’s respiratory tract and giving him oxygen until he turned pink, could breathe on his own and gave a loud cry. The baby and mother were then rushed to a nearby hospital.

The incident was captured on a phone camera in the form of two video clips and shared by a Thai Facebook user with the screen name “Min K Wg” who witnessed the incident while taking her dog to Waree’s clinic.

A Facebook user with the screen-name Kanpirom Kanesom Numtal commented: “Thank you to the beautiful doctor for helping the baby,” while Pon Chareonto said: (It’s) so amazing. I kept my fingers crossed (that the baby would survive while watching the clips). Good job, doctor!" Another Facebook user with the screen-name Jeab Mattana said: “Was keeping my fingers crossed watching the clips. The doctor is so beautiful and kind - unlike the taxis.”