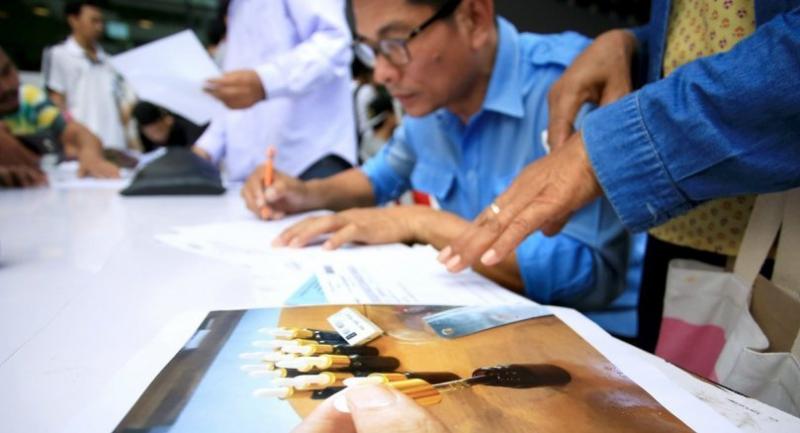 A huge number of people turn up at the Food and Drug Administration headquarters in Bangkok yesterday to apply for amnesty over their possession of marijuana.

THOUSANDS of people nationwide showed up at provincial health offices to put their names down as users of marijuana yesterday, the very last day of the amnesty period.

Despite a previous estimate that there were 800,000 to 2 million locals using marijuana to treat ailments, the number of users registered with the Food and Drug Administration (FDA) and provincial health offices for amnesty was below 20,000. Though that number doubled when combined with another 20,000 people who registered via the Kwankao Foundation, it is still far under the number of estimated users. Meanwhile, more than 1,000 people – most of them under 45 – queued up outside the FDA head office in Nonthaburi, either standing in two waiting areas or joining a 200-metre-long queue.

Dr Surachoke Tangwiwat, FDA deputy secretary-general, said some people were disqualified because they presented forged documents and photos of marijuana plants downloaded from the Net. Others, meanwhile, were allowed to register despite bringing insufficient documents. They are required to present the remaining documents later.

Surachoke explained that marijuana users were given 90 days since February 19 to register and seek amnesty under the Narcotics Act.

“Once the marijuana in their possession – which should last two to three months – is finished, a patient cannot just get more. They will be required to enter the system for diagnosis and be prescribed cannabinoid medication by authorised doctors. If a doctor believes the ailment does not require marijuana, then other medication will be prescribed,” he said.

Hundreds showing up every day

Surachoke also said that up to 800 people per day have been showing up at the FDA’s one-stop service centre during the 90-day period, and that 16,000 people nationwide have registered to date. He believes more than 2,000 people will show up to register later in the day. There were long queues in other provinces too, averaging about 100 to 200 applicants.

Monthasan Suksawat, 65, from Wat Bote district, who needs marijuana for his chronic spine and muscle pain, said he was sent back home to take photographs of the marijuana plants he grows. He said his home was 30 kilometres away, and urged the authorities to extend the deadline for the sake of patients.

She said she had undergone modern treatments for 10 years before trying marijuana oil last year. Her condition improved within three months and her cancer had gone in remission, though she will still have to monitor her health.

Akaradech Chakjinda, an adviser to a Thailand-based marijuana promoting association, registered his possession of weed oil for treating insomnia and chronic headaches, and pointed out that many people whose ailment required marijuana weren’t allowed to register. In Udon Thani, final-stage cancer patient Prapanida Chaikhini registered her possession of a small number of marijuana plants, which she depended on to make juice to drink every morning. She said her condition had improved, she was able to eat more and sleep well, and so wished to legally register for its use.

The Udon Thani health office deputy chief and pharmacist, Manoch Nakhawajana, said he had been campaigning to increase public awareness of the downsides of marijuana use, including intoxication and addiction, to ensure that Thais use marijuana products for medical purposes only.