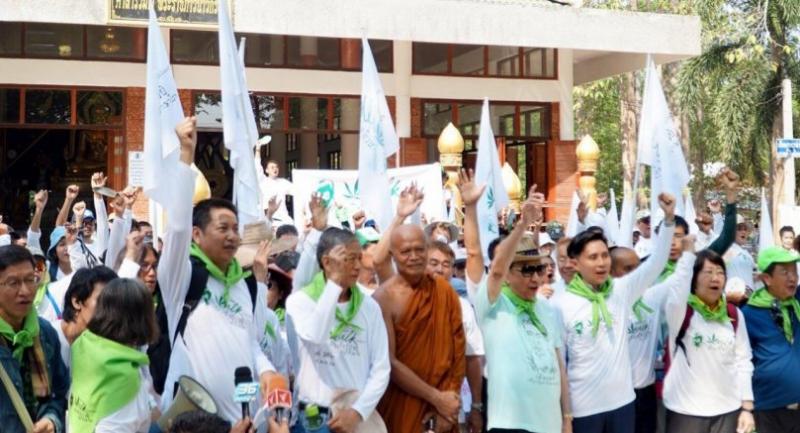 DECHA SIRIPHAT, a well-known campaigner for medical marijuana, and his allies from over 10 organisations promoting sustainable health and agriculture practices began their 270-kilometre “Cannabis Walk” yesterday from a temple in Phichit, the Transborder News website reported.

The walk, aiming to free marijuana from the legal impasse that is blocking its use for medical purposes, will wrap up in Suphan Buri. However, after his work was blocked in line with the recent amendment to the narcotics law, he and his allies decided that it was time to campaign for a new round of legal amendments.

The walk, 15km of which was completed yesterday, is being held to raise public awareness about cannabinoid medication as well as raise funds for the production of medicines, which are pending approval from concerned agencies.

In the end, Decha hopes the use of marijuana will help relieve the burden on public healthcare as people will have the option of treating themselves with marijuana at home.

Witoon Lianchamroon, a director of BioThai, one of the organisers, invited people to participate in the walk as well as put their signatures down in support of legal changes. Arthit Urairat, the rector of Rangsit University, said the state was depriving people of the right to access marijuana-based medicines, which have proved to be beneficial. He too is participating in the walk.

One patient, a retired senior police officer, told Transborder News that he had been suffering from cancer for five or six years before opting for marijuana-based medication this year.

He said his health has improved and the cancer has gone into remission since.